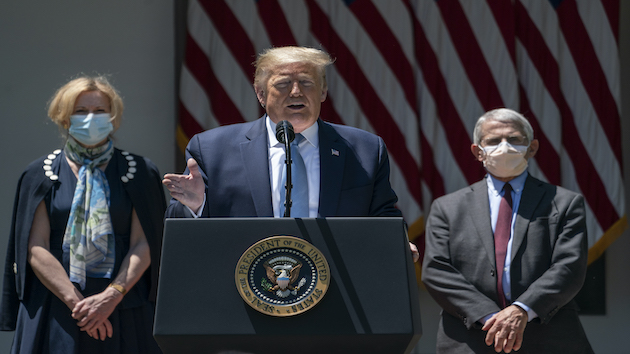 (WASHINGTON — Dr. Anthony Fauci, the nation’s top expert on infectious diseases, predicted Friday that Americans won’t be going back to anything like normal until the middle of next year at the earliest, one of several recent statements putting him at odds with President Donald Trump.

“If you’re talking about getting back to a degree of normality which resembles where we were prior to COVID, it’s going to be well into 2021, maybe even towards the end of 2021,” Fauci told MSNBC’s Andrea Mitchell.

“I believe that we will have a vaccine that will be available by the end of this year, the beginning of next year,” Fauci added. “But by the time you mobilize the distribution of the vaccinations and you get the majority or more of the population vaccinated and protected, that’s likely not going to happen till the mid – or end – of 2021.”

“When you downplay something that is really a threat, that’s not a good thing,” Fauci said, responding to Trump’s admission to journalist Bob Woodward that he intentionally minimized the danger from the virus so as not to “create panic.”

On Thursday, in contrast to the president’s rosy outlook, Fauci told a Harvard forum, “I just think we need to hunker down and get through this fall and winter, because it’s not going to be easy. We know every time we restrict, we lift restrictions, we get a blip. I mean … it’s whack-a-mole.”

His statements come days after Trump once again suggested that a vaccine would come before the Nov. 3 presidential election.

“We’re going to have a vaccine very soon, maybe even before a very special date,” Trump told reporters during a White House news conference on Monday. “You know what date I’m talking about.”

That “special date” is less than two months away, and polls showing Trump has high disapproval numbers for he’s handled the pandemic, the early availability of a vaccine could help his reelection campaign.

When asked about his recent campaign rallies – where supporters are outside but mostly packed together, with few wearing masks – Fauci said Trump’s supporters may not be safe.

“Just because you’re outdoors does not mean that you’re protected, particularly if you’re in a crowd and you’re not wearing masks,” Fauci said on Friday.

“We really need to forge ahead and do everything we can to contain this outbreak,” he said.

While Democrats raise concerns over whether Trump is putting political pressure on the vaccine approval process, he’s accused Democrats of playing “dangerous” politics with the vaccine as well, suggesting they are undermining the public’s trust in an eventual vaccine.

On Friday, Fauci said “when you’re dealing with a political atmosphere, it makes it that much more difficult.”

The high-stakes political atmosphere has put the Food and Drug Administration in the hot seat, with questions being raised about whether the agency is a truly independent public health authority.

On Thursday, FDA Commissioner Stephen Hahn insisted that the FDA’s decisions on a COVID-19 vaccine will be made based on the science and data from clinical trials, rather than political influence.

“I can tell you throughout this pandemic, throughout my tenure as commissioner, I have not reversed a decision by the career scientists on medical products, and I have no intention of doing that now,” Hahn said. He later added, “we will independently call the balls and strikes.”

Hahn conceded the FDA will be criticized for either moving “too fast or too slow,” but, ultimately, he said, he is “completely confident in the career scientists.”

Other public health officials working directly on the vaccine candidates are trying to send the message that politics has nothing to do with the process, saying that if people don’t trust a vaccine when it’s available, then it won’t be effective, because the vast majority of Americans need to get it to stop the virus.

Peter Marks, the FDA official in charge of the Center for Biologics Evaluation and Research that ensures safety of drugs and vaccines, said Friday his colleagues plan to be as transparent as possible to overcome any doubts about a vaccine’s safety.

“As we do things at FDA, they’re all focused ultimately, around the fact that we have to make sure that we have a safe and effective vaccine that people will trust enough to want to take,” Marks said at an event with Duke University.

“No, we need to get that that cacophony needs to go away. We need to understand that there are scientists here at FDA …These people are so committed to making sure that what comes through this process is safe enough for their own families. And they want they want it to be safe for everyone’s family, just like for their own family. And those people are have that incredible commitment. It’s really important that people know that is going to be out there,” Marks said.

Marks is one of several senior FDA officials, who, in another effort to restore public confidence in the agency, penned an op-ed in USA Today on Thursday, restating their commitment to rely on science and data when making decisions.

“We absolutely understand that the FDA, like other federal executive agencies, operates in a political environment,” the officials wrote. “That is a reality that we must navigate adeptly while maintaining our independence to ensure the best possible outcomes for public health.”

“The foundational and fundamental principles of the FDA, however, remain steadfast: to protect and promote the health and well-being of the American public, and to base our decisions in support of our public health mission on sound science,” they said.