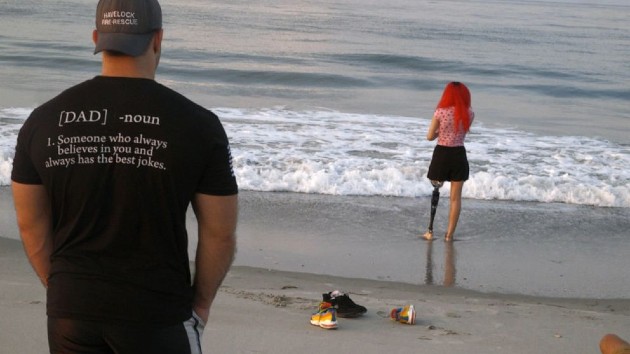 (NEW YORK) — It’s been over a year since Paige Winter lost her leg and part of her hand from a bull shark attack off the coast of North Carolina in which her father jumped to the rescue.

But like the tide, Winter and her family’s road to recovery have had highs and lows.

Winter first told Robin Roberts in an exclusive interview on ABC News’ Good Morning America weeks after the incident that she refused to let the attack keep her down. Now, in a new Robin Roberts event special, Shark Attack: The Paige Winter Story, she and her family share exclusive details of the dramatic rescue, inspiring moments from their strides toward progress over the last year and her emotional return to the beach where the life-changing incident took place.

“Summer 2019 was looking very promising. You know, school was about to end,” Winter told ABC News thinking back to her summer vacation plans before the attack. “It was lookin’ pretty good. I was excited. I was happy. Then, you know, sometimes things happen.”

Winter, who was 17 at the time, said that on Sunday, June 2, her father Charlie Winter “wanted to have a family day,” but little did any of them know how much their strength and bond would be tested.

The group — including Winter’s best friend Kale Wynant, who her mom Marcy Winter said she considers part of the family — went to Ft. Macon Beach and after finding a spot on the sand, made their way into the water.

Winter recalled that it had “rained really hard the night before” and explained that made the water “brackish” and murky. “It was shallow for a long time and at first I’m like, ‘ugh I’m gonna go back, this is cold,"” she noted, but said she eventually decided to stay in.

Once in the water with her sister Anais Winter and best friend Kale, she noticed her dad attempting to sneak up on them.

Winter said she stepped on something in the water and thought it was her dad, thinking to herself “‘That’s fine. Real funny.’ And then I was like, ‘Ow. That kind of hurts.’ And then, I get pulled underwater. Like, completely yoked.”

“When I came back up, I saw Paige get pushed out of the water, like pushed upwards,” Wynant recalled. “I just heard Anais say, ‘Paige, what are you doing?"”

Anais Winter was the first of the family to see what was unfolding in the water.

“I saw her get taken down by the shark and then I saw her blood come up,” she said.

Winter likened the feeling of being pulled relentlessly to “playing with a dog” when it clings onto and shakes a rope side to side. “And then I was like, I don’t know what to do,"” she added.

As she felt the shark’s teeth, which she compared to a bear trap, pierce into her hand, Winter attempted to break free. She said the shark let go for a moment and then bit down on her left leg instead.

“It happened really fast, but a lot of thoughts were going through my head,” she remembered. “‘Am I going to drown or am I going to bleed out? I really don’t want to die.’ So I started praying.”

Her dad, a former Marine turned firefighter, immediately rushed to help his daughter.

“I ran, I just started running. It didn’t take me long to get there, but I just got there. I just ran, I ran where the pink was moving and I dove under and I grabbed Paige with my left arm and I brought her up,” he said. “When I brought her up, there was resistance.”

Charlie Winter recalled the moment he came face to face with the ocean predator that he had to fight off.

Thinking back on the incident, Charlie Winter added, “I took that moment in, ’cause I needed to take that moment.”

“I was looking at it, and I could feel the raw power of what that shark was trying to do,” he said. “That shark wasn’t there to be my friend. It tried to kill my daughter.”

After he scooped her out of the water, Charlie Winter held her as her leg bled out and said, “I thought I was carrying my dead child.”

Winter’s father thought back to when Paige was just a newborn and said, “I knew it was my job and my responsibility to take care of this little — this little baby.”

After Charlie Winter got out of the Marine Corps, he became a firefighter and paramedic, because he said, “I wanted her to be proud to go to school, and say what her dad did for a living.”

“I think my dad is like a real actual hero, you know? He goes and he saves lives every day. He does all the things he can,” Winter said. “He does his job really well.”

Although Winter’s parents have not been married since she was nearly 2 years old, the pair told ABC News the decision to co-parent has made them good friends and they agree that they have “done a really good job.”

Marcy Winter described her ex-husband as stalwart, steadfast and reliable, adding, “my kids have grown up knowing not only that people like that exist, but they’ve also got the safety net of knowing that like that person super exists in their world.”

Tune in Thursday at 10 p.m. ET on ABC to hear more about Paige Winter’s surgery, recovery and life over the last year after the attack, including her first steps using a prosthetic leg, her triumphant milestones during her senior year of high school and the emotional return to the scene on the shore where the attack took place.