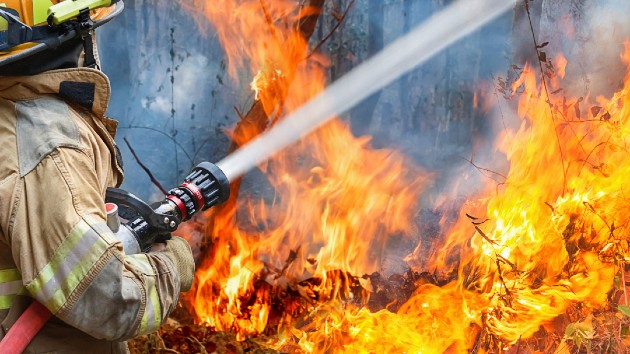 (NEW YORK) — A 1-year-old was killed and his parents suffered third-degree burns after attempting to escape a wildfire in Washington state, authorities said.

Jacob Hyland, 31, and Jamie Hyland, 26, of Renton, Washington, were discovered with their child on the bank of the Columbia River in Okanogan County Wednesday morning after they had abandoned the car they were traveling in, officials said. All three had suffered from severe burns.

Their child had died by the time search crews found them, officials said.

According to Hawley, the family was attempting to leave their property to escape the Cold Springs Fire, one of several wildfires to erupt in Washington over Labor Day weekend. The sheriff’s office was contacted Tuesday afternoon about locating the missing family, whose car was found burnt but not occupied. The couple’s families had last spoken to them on Sunday, Hawley said.

The three victims were transported by boat to Bridgeport State Park, from which an ambulance transported them to Three Rivers Hospital in Brewster, Washington, Hawley said. Jacob Hyland and Jamie Hyland were separately flown to Harborview Medical Center in Seattle Wednesday afternoon to treat their third-degree burns, officials said.

Both are in critical condition and are being cared for by trauma and burn specialists, Harborview Medical Center told ABC News in a statement.

Detectives are investigating the child’s death, and investigators are working to determine the cause of the fire, which started Monday and has burned more than 164,000 acres, authorities said.

The weekend’s wildfires leveled an entire town in eastern Washington, Seattle ABC affiliate KOMO-TV reported. This is the first reported death from the fires, according to Hilary Franz, commissioner of Public Lands for the Washington state Department of Natural Resources.

“My heart breaks for the family of the child who perished in the Cold Springs fire,” Franz said in a statement posted to Twitter Wednesday evening. “I am devastated.”

Franz added that she “needs every single resident of Washington to care” about protecting lives from wildfires.

“Not just today, but tomorrow, and every day until we have the resources to protect our communities and protect our firefighters,” she continued.

The child was one of at least seven people who have died in the West as nearly 200 wildfires burn across nine states.

Two people were found dead in a vehicle in Marion County, Oregon, Wednesday, after fire swept through the area on Monday. Also in Oregon, a third victim was found near the origin of the Almeda Fire that began near homes in Medford on Tuesday, officials said. Three others were found dead in Butte County, California, on Wednesday evening, including two people at the same location, as a result of the Bear Fire, Butte County Sheriff Kory Honea said.

NXIVM founder Keith Raniere sentenced to 120 years in prison
‘Colin in Black & White’: Jaden Michael to star as Colin Kaepernick in Netflix series
George Clooney ventures into the unknown in ‘The Midnight Sky’ trailer
The CW unveils photos of Javicia Leslie in costume as the new Batwoman
Thirty officers injured in protests after shooting of knife-wielding man by Philadelphia police
Election 2020 live updates: Biden on offense in Georgia, Trump on defense in Midwest