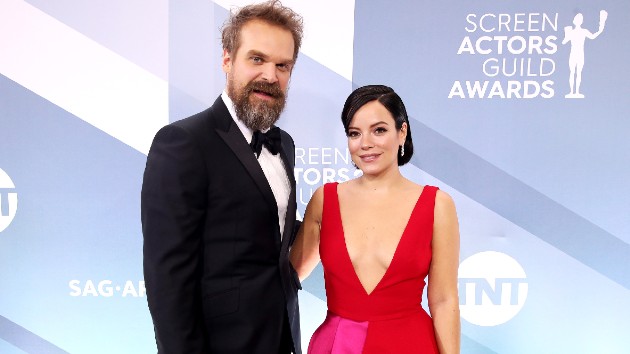 (LAS VEGAS) — Wedding bells are ringing for Lily Allen and Stranger Things star David Harbour, who tied the knot in an intimate and secret Las Vegas wedding on Labor Day officiated by an Elvis impersonator.

“In a wedding officiated by the king himself, the people’s princess wed her devoted, low born, but kind credit card holder in a beautiful ceremony lit by the ashen skies courtesy of a burning state miles away in the midst of a global pandemic,” Harbour wrote.

Allen also posted a series of photos from the nuptials on her Instagram.

Rumors ignited on Tuesday that Allen, 35, and Harbour, 45, were gearing up for a trip down the aisle after reports surfaced of the two obtaining a marriage license on September 6.

However, true to the couple’s notoriously private dating life, they managed to outfox everyone — including their sleuthing superfans — and keep their ceremony a complete secret from the public eye.

Allen first hinted that she was engaged back in May when she uploaded a mirror selfie that showed off a dazzling piece on her ring finger, but she failed to mention it in her caption.

When a fan tried to squeezing more information out of her, Allen cheekily commented “First rule of engagement club….” — a direct reference to the movie Fight Club.  For those who haven’t seen the movie, the quote goes, “The first rule of Fight Club is you do not talk about Fight Club.”

Allen and Harbour first sparked dating rumors last summer but didn’t publicly confirm their relationship until they walked the red carpet together at the 2020 SAG Awards in January.

Prior to wedding Harbour, the “Smile” singer was previously married to Sam Cooper from 2010 to 2015 and welcomed two daughters, Marnie Rose and Ethel.

It appears both Marnie and Ethel adore Harbour, as seen by photos of the new family’s most recent vacation in Croatia and subsequent goofing around in Las Vegas.

‘Goliath’ star Billy Bob Thornton on taking the reins as director for the final season premiere
COVID-19 live updates: Hospitalizations reach another all-time high in Iowa for 2021
1 dead, 13 hurt in shooting at Kroger grocery store near Memphis: Police
“Will they kill me?” See Kristen Stewart as Princess Di in the final trailer for ‘Spencer’
The Case For Believing In Michigan Football
Patina Miller explains why she loves the “challenge” of playing Raquel in ‘Raising Kanan’