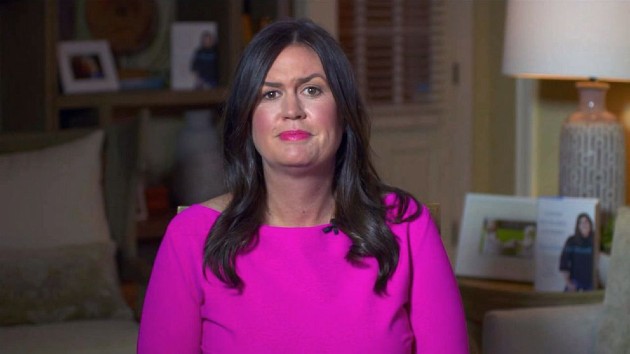 (NEW YORK) — Former White House press secretary Sarah Huckabee Sanders said Tuesday in an exclusive interview on ABC’s Good Morning America that her former colleagues who have criticized President Donald Trump after leaving their positions were “disgruntled employees” who “have tried to push their own agenda.”

“It’s really simple,” Sanders said. “I think mine is actually the honest account. You’re looking at people who have left as disgruntled employees, people who have tried to push their own agenda.”

Sanders’ book, Speaking for Myself: Faith, Freedom, and the Fight of Our Lives Inside the Trump White House, covers her years in the White House. She said it was “very candid, very authentic and shows you a different side of the president.”

One voice critical of Trump — Retired Gen. John F. Kelly, a former White House chief of staff under Trump — has remained silent in the past several days after a report in The Atlantic last week said Trump had made disparaging remarks about members of the military.

Pressed by Stephanopoulos on why Kelly had not spoken out to defend the president, as Sanders and numerous other current and former officials had, Sanders said, “That’s a question you’d have to ask General Kelly.”

Sanders said she was present on the day Trump reportedly called fallen service members “losers” and “suckers” and that “those comments didn’t happen.” ABC News has not confirmed The Atlantic’s account.

Trump’s former personal attorney, Michael Cohen, also has a book critical of the president out Tuesday.

“Having a difference of opinion is not a bad thing,” Sanders said. “I think that’s one of the reasons the president has been successful. He’s willing to listen to those people.”

The former press secretary would not confirm speculation she was considering a run for governor of Arkansas, her home state. Her father, Mike Huckabee, served as governor from 1996 to 2007.

“We’ll see,” Sanders said. “Right now my focus is on the 2020 election, helping the president get re-elected. I’d love to see us pick up some more seats in the Senate and take back the House, and I’ll make a decision on that after we get through 2020.”

Sanders also said that being a mother helped her in her role as press secretary, from telling both reporters and children “no” to having a consistent message.