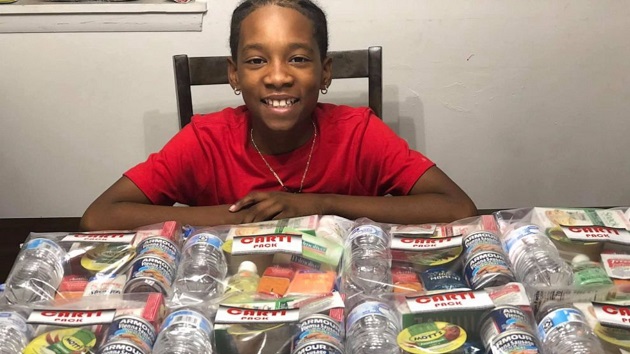 (HAMPTON, Virginia) — Eleven-year-old Cartier Carey spent his summer at his lemonade stand in Hampton, Virginia raising money to buy diapers, wipes and other supplies for parents who needed help during the COVID-19 pandemic.

Cartier told ABC News that he noticed a shortage of diapers in stores during the pandemic and wanted to help.

“There was no diapers at all and I was like, ‘Oh, people are having babies so I should help [them] afford diapers,’” said Cartier.

He started a lemonade stand and made about $4,500 in the first month. His stand also served as a diaper drive where people could donate diapers.

On his first day back to virtual school, Cartier is still hard at work loading up a truck with more than 22,000 donated diapers.

In a heartwarming moment captured on video and shared by his own mother, one mother was moved to tears by Cartier’s work, saying that it reminded her of a time when she was in need.

“You are helping so many people. You have no idea. You see this truck? I didn’t always have this truck. I lived in a church home. And coming from where I came from and now here, it’s because of people like you. People gave me diapers, you know?” said the mother. “You’re an amazing young man and you can go far.”

Cartier said he wouldn’t forget that vulnerable moment and that it motivated him to keep working.

“It was heart-touching. I [almost] cried myself when she gave me a hug and started crying,” said Cartier. “After that, that made me just want to keep doing it.”

Although he’s back in school, Cartier told “World News Tonight” that he will continue his mission. Cartier and his mother started a non-profit organization called “Kids 4 Change” to help get other kids involved in the initiative. Cartier said that his inspiration is Kobe Bryant because the late basketball player inspired him to be great and work hard.

“Others can make a difference just like I’m doing right now,” he said. “They can save lives and be heroes. They’re never too young.”