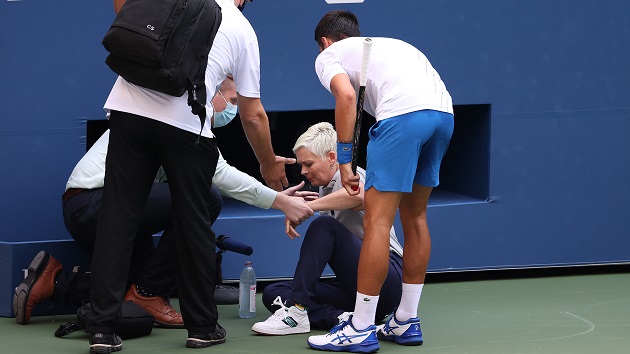 (NEW YORK) — Novak Djokovic has issued an apology after he defaulted from his round of 16 match and was booted from the U.S. Open after accidentally hitting a line umpire with a ball.

In the first set of his match against Pablo Carreno Busta, the top-seeded Djokovic hit a ball after a point toward the backboard of Arthur Ashe Stadium.

The ball struck a line umpire, causing the umpire to collapse and gasp for air. The line umpire had to be helped off the court.

Djokovic, the three-time U.S. Open champion, appeared to be frustrated throughout the match.

The U.S. Tennis Association tells ABC News that the line umpire was observed and treated by USTA Director of Player Medical Services Dr. Brian Daniels. She was moved to Louis Armstrong Stadium, where the officials’ area is located, and is doing OK, according to the USTA.

ESPN reported Sunday evening that the line umpire has a bruise on her throat and is resting comfortably at the officials’ hotel.

In a statement, the USTA said, “In accordance with the Grand Slam rulebook, following his actions of intentionally hitting a ball dangerously or recklessly within the court or hitting a ball with negligent disregard of the consequences, the U.S. Open tournament referee defaulted Novak Djokovic from the 2020 U.S. Open.”

Djokovic apologized for the incident Sunday evening on social media.

“This whole situation has left me really sad and empty. I checked on the lines person and the tournament told me that thank God she is feeling ok. I‘m extremely sorry to have caused her such stress. So unintended. So wrong,” he wrote.

“As for the disqualification, I need to go back within and work on my disappointment and turn this all into a lesson for my growth and evolution as a player and human being. I apologize to the @usopen tournament and everyone associated for my behavior. I’m very grateful to my team and family for being my rock support, and my fans for always being there with me. Thank you and I’m so sorry,” he added.

The USTA said that Djokovic will lose all ranking points he earned at the Open and will be fined the prize money won at the tournament and could face future fines because of the incident.

In his post-match press conference, Carreno Busta said he did not see the incident when it happened.

“I was looking to my coach, celebrating the break. And when I turned back again the line umpire was on the floor,” the Spaniard said. “I was in shock because I never expected this moment.”

“The rules are the rules,” he said. “I think the referee and the supervisor did the right thing.”

Friemel told ESPN that he did not see the incident live, but after speaking with the Tourte, Egli and Djokovic, it was evident there was a rules violation.

“The facts clearly state that according to the rules he had to be defaulted.” Friemel said, due to the fact that Djokovic’s striking of the ball was reckless and with anger.

Friemel also confirmed that Djokovic now faces a $10,000 fine for the incident, and that Djokovic’s intent was taken into consideration when it came to the fine. Had Djokovic intended to injure the line judge, the penalty would have been harsher, Friemel said.

“We would have done the same decision on any other court with any other player,” he added.

Djokovic will likely face an additional fine for not attending his post-match press conference after he left the grounds of the USTA Billie Jean King National Tennis Center without taking questions.

Tennis champion John McEnroe said, “It was a rookie mistake … by him to not look and hit a ball back where he wasn’t even looking where he was hitting it.”

“To hear the referee say we are going to give the same treatment to every single player in the draw, it makes the rest of the draw, in my opinion, feel much better,” he said.

The Serbian grand slam champion had been the favorite to win the tournament, which has been played without fans due to the COVID-19 pandemic.

This year’s U.S. Open will now be the first time since 2014 that the men’s singles title will go to a first-time winner. The disqualification also breaks Djokovic’s streak of 26 winning matches this year.