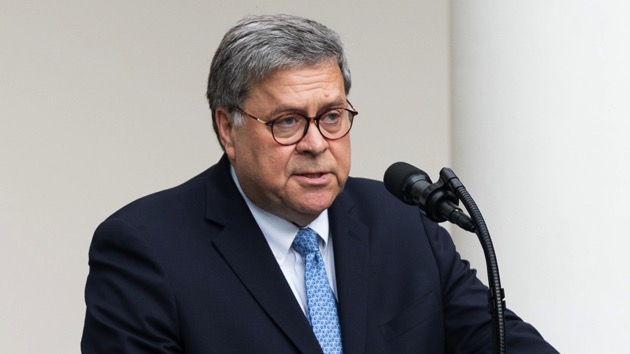 (WASHINGTON) — Attorney General William Barr gave a false recounting of a voter fraud case in Texas during an interview Wednesday as he sought to bolster his unfounded argument that mass expansions of mail-in voting in 2020 will increase the risk of widespread fraud.

Barr incorrectly said in an interview with CNN’s Wolf Blitzer that elections that have been held with mail have found substantial fraud and coercion, before launching into the false account. “For example, we indicted someone in Texas, 1,700 ballots collected, he — from people who could vote, he made them out and voted for the person he wanted to. OK?”

Barr added, “That kind of thing happens with mail-in ballots and everyone knows that.”

But Barr’s description was not even close to what happened in the case, which was never under the Justice Department’s purview in the first place — according to Andy Chatham, a former assistant district attorney who worked on the investigation in 2017.

“I was like, ‘What? Why would he talk about that case?"” Chatham told ABC News Friday when asked about his reaction to hearing Barr invoke the investigation. “This wasn’t a case of voter fraud. This was a case of what we think was a political consultant trying to scam candidates.”

In a statement Friday, Justice Department spokeswoman Kerri Kupec acknowledged that Barr’s description of the case was incorrect.

“Prior to his interview, the Attorney General was provided a memo prepared within the Department that contained an inaccurate summary about the case which he relied upon when using the case as an example,” Kupec said.

The Washington Post first reported the news of Barr’s false description of the Texas case.

In May 2017, Chatham opened the investigation after hearing a host of complaints from Dallas County residents who were notified they would be sent mail-in ballots even though they hadn’t requested them. According to the Dallas Morning News, more than 600 mail-in ballots were also identified that bore the signature of ‘Jose Rodriguez,’ which was believed to be a fake name of an individual who purportedly assisted voters in filling out their ballots.

Chatham described an exhaustive process that officials in his office ultimately undertook to contact the individual voters and ensure that the mail-in ballots they had sent in were accurate.

“The statistical percentage of ballots that were returned were almost exactly what the election result was,” Chatham said.

Twenty-eight-year-old Miguel Hernandez was eventually found guilty in the investigation for forging a voter’s signature on a mail-in ballot he returned. Chatham described Hernandez as the “fall guy” in the scam, being paid by a still-unknown consultant to contact individuals who had received mail-in ballots and return them so they could potentially be tampered with.

“He violated the law but not for voting, it was for procuring mail-in ballots under false pretenses,” Chatham said. “The other thing that Barr got very wrong about the case is that we knew about this thing before it even happened, and prevented any potentially fraudulent ballots from being cast.”

“It was a tremendous success story for the office,” Chatham added.

Barr’s false description of the case comes as officials in the intelligence community are warning Russia is seeking to “amplify” concerns over the integrity of U.S. elections by promoting allegations that mail-in voting will result in rampant fraud.

Analysts with the Department of Homeland Security’s intelligence arm issued a bulletin to federal and state law enforcement partners Thursday after finding with “high confidence” that “Russian malign influence actors” have targeted the absentee voting process “by spreading disinformation” since at least March.

Barr’s comments mark the second instance this summer that he has spread misinformation regarding a law enforcement matter.

In July, Barr claimed at an event at the White House that the pilot launch of the ‘Operation Legend’ law enforcement initiative in Kansas City, Missouri, had yielded “200 arrests” in just two weeks.

Local officials told the Kansas City Star they were not familiar what he was referring to, and a DOJ official later corrected Barr, saying that he was actually speaking about 200 arrests by both the state and the FBI dating back to December 2019.

In fact, at that point Operation Legend had only resulted in a single publicly announced arrest in Kansas City.