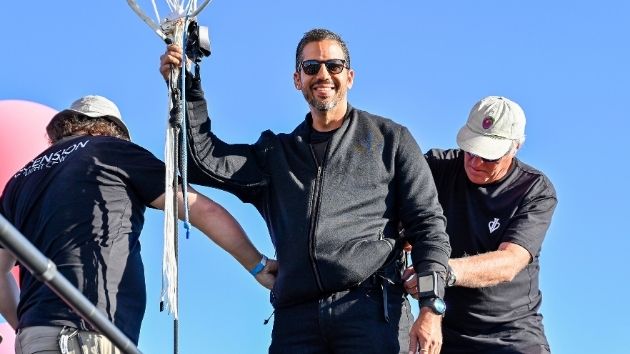 (PAGE, Ariz.) — Magician David Blaine has made YouTube history after completing his first stunt in nearly a decade.  Hundreds of thousands turned into watch the daredevil soar over Arizona using only a bunch of balloons — yes, just like the animated Disney-Pixar film Up.

Once Blaine went airborne, he soared as high as 25,000 feet — about 4.5 miles — where apparently oxygen levels at that height are half of that you breathe at sea level.

Fans were able to soak in the breathtaking views as Blaine ascended higher and higher thanks to the cameras equipped to his impressive balloon-carrying contraption.  However, they also watched in suspense when Blaine eventually had to let go and plummet back to earth.

He safely planted his feet back on the ground after deploying his trusty parachute.

Understandably, this stunt was a long time in the making due to the extreme danger Blaine willingly put himself through.  The magician said he trained for two years to complete his new trick — even securing a pilot’s license, a commercial balloon pilot’s license and skydiver certification to make sure he left no loose ends.

According to YouTube, the livestream broke all sorts of records on the site, such as becoming the most-watched YouTube Originals live event in website history.  At peak viewership, more than 770,000 people were watching at the same time.

So, what does Blaine have up his sleeve next?  Thanks to his YouTube channel, fans can now stay tuned.