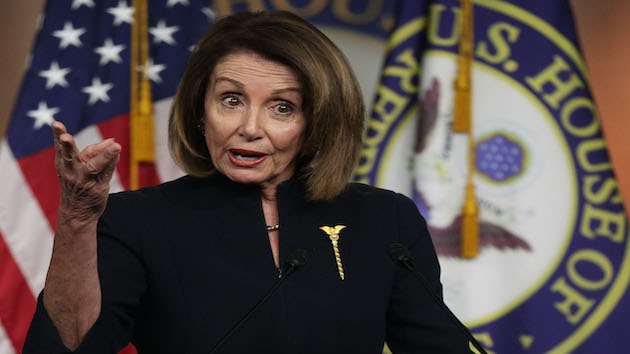 (SAN FRANCISCO) — President Donald Trump joined Republicans on Wednesday in attacking House Speaker Nancy Pelosi for a private visit to a San Francisco hair salon earlier this week, in which she received styling indoors, despite city-wide restrictions on indoor styling.

Security camera footage captured her at one point wearing a mask around her neck instead of over her face.

Pelosi’s office, citing guidance provided to her from the salon, has denied she broke any rules.

“Crazy Nancy Pelosi is being decimated for having a beauty parlor opened, when all others are closed, and for not wearing a Mask – despite constantly lecturing everyone else,” Trump said in a tweet Wednesday morning.

Suggesting the event will harm Democrats in the House, the president added, “We will almost certainly take back the House, and send Nancy packing!”

In security video Fox News said it obtained, Pelosi is seen walking through the eSalon in San Francisco on Monday afternoon with wet hair and with a mask at her neck instead of over her mouth and nose. Her stylist is seen following her wearing a black face mask. It was unclear from the video whether she had the mask on her face during the rest of the appointment.

Pelosi spokesman Drew Hammill said that she wore a mask except for a short period of time when she got her hair washed.

Hamill said the speaker followed requirements provided by her stylist and was told the city allowed the salon to have one customer in the business at a time.

“The Speaker always wears a mask and complies with local COVID requirements. This business offered for the Speaker to come in on Monday and told her they were allowed by the city to have one customer at a time in the business. The Speaker complied with the rules as presented to her by this establishment,” he said in a statement.

“It was a slap in the face that she went in, you know, that she feels that she can just go and get her stuff done while no one else can go in, and I can’t work,” Fox News said the the salon’s owner Erica Kious, told them in a phone interview.

Kious said that Pelosi’s stylist rents a chair in her salon but operates independently. It’s unclear if the salon allowed other stylists to conduct private services during the shutdown.

A statement from the San Francisco mayor’s office posted Friday states that outdoor services at hair salons — which have been closed since March — could resume Tuesday — a day after Pelosi’s appointment — but added that “services may not be provided indoors” and masks must be worn.

“Outdoor personal services that can operate include haircuts, barber services, massages and nail services. Only those services where both clients and providers can be masked at all times are allowed to resume,” it reads.

The new guidance which took effect September 1 also states shampooing is not allowed and that stylists must not see multiple customers at once.

“This is typical Washington, D.C. They get on national TV. They preach to the American people that it should be one way and, yet, in private, when the cameras are not rolling and in this case I guess the cameras were rolling, it shows a very different story,” Meadows told Fox News. “It’s the same thing whether it’s in San Francisco with her going into a salon or in the privacy of a negotiating room.”

A Twitter account operated by Senate Republicans on Tuesday evening, appearing to quote Kious, also called Pelosi’s visit a “slap in the face” to business owners forced to close to slow the spread of COVID-19.

“Speaker Pelosi has pushed policies that would keep our economy closed and our small businesses shut down. But for herself? A salon visit whenever she pleases,” the Senate Republicans account tweeted, adding: “A ‘slap in the face’ indeed.”

Although Republicans are bashing the speaker, the president resisted wearing a mask for three months after announcing the Centers for Disease Control and Prevention guidance and his supporters at a rally last week in New Hampshire booed an announcer who asked the crowd to put on facial coverings.

Pelosi’s office maintains she follows all local COVID-19 requirements including those presented to her by the salon.