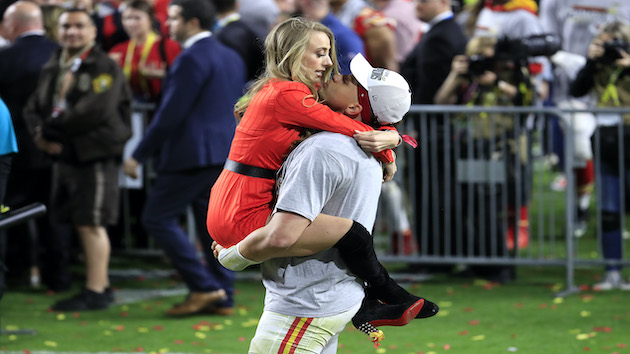 Mahomes, 24, proposed to his high school sweetheart right after his team finally received their Super Bowl LIV rings at Arrowhead Stadium. Meaning, when he received his ring, he made sure Matthews had one to match.

The personal trainer was actually the one to reveal exactly how her now-fiancé outdid his own ring ceremony. In a series of Instagram stories, the 25-year-old documented moments from the special day.

The quarterback apparently led her to one of the stadium’s sky boxes, which he had decked out from floor to ceiling with white flowers — including a flurry of petals to cover the ground — and a light up sign that asked “Will you marry me.”

Matthews captioned that particular snap, “this happened today,” along with the heart eyes and a sobbing emoji.

The next Instagram story update revealed her impressive and gorgeous engagement ring, which touts a massive emerald cut diamond and two diamond-studded bands.

Mahomes wasn’t done after popping the big question. The personal trainer revealed that he then set up a special candlelit dinner out on their patio to celebrate their upcoming nuptials. “My heart is so full! I love this man so incredibly much and today was so special,” gushed Matthews. “Couldn’t imagine this day being anymore perfect.”

Just the day before, the two celebrated her 25th birthday.

The couple has not announced their wedding date.

Scoreboard roundup — 11/26/20
Black Friday 2020: Tips on the best deals to look out for
Michael Jordan donates $2M of proceeds from “The Last Dance” to food banks
George Floyd’s brothers on the fight for justice, remembering him on Thanksgiving
Scientists, students demand action to keep Arecibo radio telescope operating
Heavy rain in the Northeast, critical fire danger in the Southwest