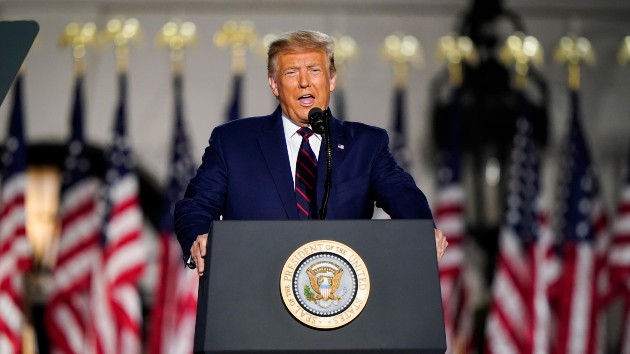 By WILL STEAKIN, JUSTIN GOMEZ and TERRANCE SMITH, ABC News

“I profoundly accept this nomination for President of the United States,” Trump said, though his prepared remarks had him saying “proudly.”

Trump delivered a 70-minute speech, second-longest in the history of conventions behind only his 2016 speech, targeting former Vice President Joe Biden in some of his harshest and misleading terms yet. He painted the election as an existential choice between lawlessness and law and order, while capping off four days of a convention centered around re-framing the history of not only the last few months but the president’s first term in office.

The president delivered what at times felt like a Frankenstein speech, fluctuating between what seemed in the style of a State of the Union address and then what you’d hear at a standard Trump rally.

During his speech, Trump was at times speaking over screaming sirens and protesters just outside the White House calling for racial justice, a piece of reality creeping into a speech at times designed to use the unrest in the streets of Trump’s America against Biden.

With perhaps his most captive American audience yet this election cycle, Trump continued to falsely paint Biden as a candidate who would defund the police, raise taxes for all Americans, and reject science to push for a national lockdown to halt the pandemic — all claims that go against what the former vice president has repeatedly said publicly.

After Biden didn’t mention the president once by name in his acceptance speech, Trump mentioned his rival over 40 times by name.

“If you give power to Joe Biden, the radical left will Defund Police Departments all across America,” the president said.

“They will make every city look like Democrat-run Portland, Oregon. No one will be safe in Biden’s America,” Trump said, as an effort to try and pin mass unrest breaking out under his own presidency to Biden, who hasn’t been in office in nearly four years.

And as protesters outside the White House called for racial justice, Trump did not mention any of the Black Americans by name who’ve been killed by police over the year — including Jacob Blake — that has sparked the historic demonstrations across the country. Instead, Trump discussed multiple members of law enforcement who had been killed in the line of duty, a clear effort to lean into his law and order posture.

In another example of the president trying to reframe the reality of the moment gripping the nation, Trump looked to re-write the history of his administration’s coronavirus response, which experts have said resulted in a devastatingly botched response to the worst pandemic in a century, painting the crisis in unrealistic rosy terms despite the country having well over five million cases and nearly 180,00 Americans dead.

“To save as many lives as possible we are focusing on the science, the facts and the data,” Trump said, despite having spent months downplaying the virus’ threat and pushing wildly unproven treatments like injecting disinfectant as treatment.

The president, who recently said “it is what it is” when asked about American deaths from COVID-19, did at one point offer a rare personal and consoling message regarding the virus that’s ravaged the country, saying, “Many Americans, including me, have sadly lost friends and cherished loved ones to this horrible disease.”

“As one nation, we mourn, we grieve and we hold in our hearts forever the memories of all of those lives that have been so tragically taken, so unnecessary. In their honor, we will unite in their memory. We will overcome,” he said.

At one point the president tried to argue that his administration was “aggressively sheltering those at highest risk, especially the elderly,” even while directly speaking in front of a massive crowd on the White House South Lawn that had numerous older attendees packed closely together who are at a higher risk to the virus due to their age.

Trump, who has faced criticism over not being able to effectively lay out his second-term agenda, told the American people, “In a new term as president, we will again build the greatest economy in history, quickly returning to full employment, soaring incomes and record prosperity.”

“We will rekindle new faith in our values, new pride in our history, and a new spirit of unity that can only be realized through love for our great country. Because we understand that America is not a land cloaked in darkness, America is the torch that enlightens the entire world,” Trump said.

Toward the end of his remarks, the president turned and basked in the glow of the White House made up like a massive MAGA rally and said to his supporters, “The fact is I’m here. What’s the name of that building? But I’ll say it differently. The fact is we’re here, and they’re not.”