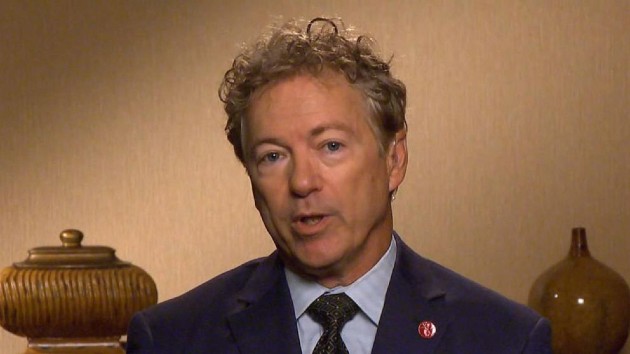 (WASHINGTON) — Sen. Rand Paul claimed he was “attacked by an angry mob” early Friday morning in Washington, D.C., while walking with his wife from the White House after listening to President Donald Trump’s closing remarks at the Republican National Convention.

“Just got attacked by an angry mob of over 100, one block away from the White House,” Paul said in a post on Twitter, while thanking the Metropolitan Police Department of the District of Columbia for “literally saving our lives from a crazed mob.”

Just got attacked by an angry mob of over 100, one block away from the White House. Thank you to @DCPoliceDept for literally saving our lives from a crazed mob.

In one video taken by a bystander who posted it on social media, Paul and his wife Kelley are seen being escorted by police through a rowdy crowd of protesters as the officers shout, “move back.” Some protesters can be heard yelling, “say her name” and “Breonna Taylor.”

The Republican senator represents Kentucky where Taylor, an unarmed 26-year-old Black woman, was shot to death by police at her home in March.

The officer flanked to Paul’s left is seen using his bicycle to hold back protesters. At one point, the officer appears to push a protester with his bike and the individual pushes back hard enough to cause the officer to lose his balance. Paul braces the officer with his arm to keep him from falling.

The video doesn’t seem to show Paul or his wife being touched by any protesters. The couple also did not appear to be injured.

Sen. Ted Cruz took to Twitter early Friday to weigh in on the incident, calling it “horrific.”

“This madness has to stop,” Cruz tweeted.