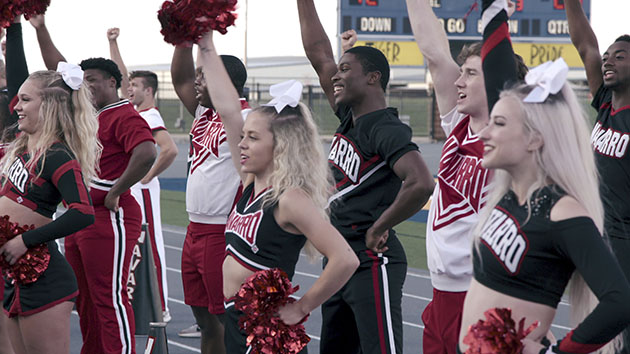 Courtesy of Netflix
Posted on August 24, 2020 by ABC News

(LOS ANGELES) — Cheer, the smash-hit Netflix docuseries, is up for several Emmy Awards and the first week of voting has officially commenced.

Social media was set ablaze when the series dropped on January 8; partly fueled by enthusiastic celebrity endorsements from A-listers such as Reese Witherspoon and Chrissy Teigen.

The series, which follows the true story of a community college that defied the odds to house one of the best cheerleading programs in the country, could win six Emmy Awards, including Outstanding Cinematography for a Reality Program.

Melissa Langer and Erynn Patrick, co-Directors of Photography for the series, had a lot to say to ABC Audio about what those Emmy nominations mean to them.

Patrick noted that while the multiple Emmy nods are incredible, more needs to change in regards to putting more women behind the camera. In addition, out of the 47 people nominated in her category, she and Langer are the only women.

While saying “the film industry has been pretty exclusive for a very long time,” Patrick believes the nominations are a step in the right direction to benefit women in her industry.

“We really want to be hired for our skills as camera women, not as a qualifier to fill a diversity quota,” she explained. “The more visibility that we have, the easier it becomes for that playing field to be leveled.”

As for Langer, she says “it’s just validation across the board” to be nominated.

The first-time Emmy nominee also added “it’s a good feeling” that Cheer resonated with such a large audience.

“There is something to be said for seeing a group of people come together in a very collective and supportive way in a climate that is oftentimes not that,” added Langer, explaining how the show garnered its massive following.