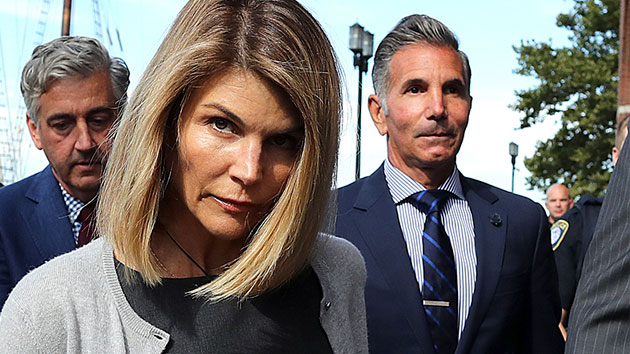 Loughlin and Giannulli pleaded guilty May 22 of this year via video conference before a federal judge in Boston after maintaining their innocence since their March, 2019 arrest.

Giannulli was sentenced first, not long after the hearing’s 11:00 a.m. ET start.  Judge Nathaniel Gorton called Giannulli’s actions “motivated by hubris” and part of “a breathtaking crime on the nation’s higher education system.”

Appearing via video before sentencing, Giannulli told the court “I deeply regret the harm that my actions have caused my daughters, my wife and others.  I take full responsibility for my conduct.”

In all, Giannulli was sentenced to five months in prison, two years of supervised release during which time he must complete 250 hours of community service, and was ordered to pay a $250,000 fine.

Of the two parents, prosecutors portrayed Loughlin’s husband as more active in the scheme, though they called the actress “fully complicit.”  Loughlin’s sentencing came several hours later, with Judge Gorton also accepting Loughlin’s guilty plea and sentencing her to two months in prison, as well as a $150,000 fine and 100 hours of community service.

“I am truly, profoundly and deeply sorry,” Loughlin told the court before her sentencing, appearing to hold back tears.  “I am ready to face the consequences and make amends.  I made an awful decision.  I allowed myself to be swayed from my moral compass”

The sentences and fines are in line with what federal prosecutors recommended earlier this week in a sentencing memo.

Loughlin, 56, and Giannulli, 57, pleaded guilty for their roles in the massive college admissions scam, the investigation of which the FBI dubbed Operation Varsity Blues. They had both been accused of paying Rick Singer $500,000 to get their daughters Isabella Rose and Olivia Jade into USC as crew recruits — even though neither girl had ever rowed competitively.  Singer also pleaded guilty to his role in facilitating the fraud.

Prosecutors have charged over 50 suspects, including parents and coaches, in the investigation.  Former Desperate Housewives star Felicity Huffman pleaded guilty to related charges in May of last year and was sentenced to two weeks in prison, 250 hours of community service and a $30,000 fine.