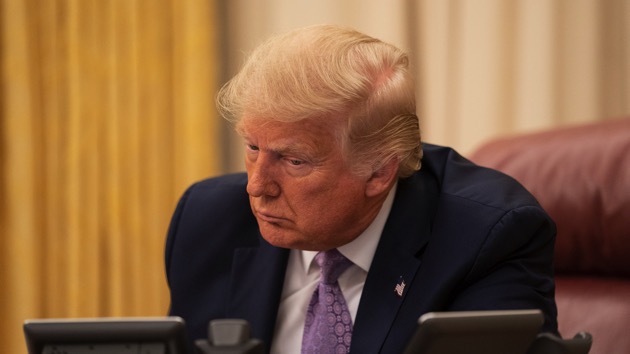 (NEW YORK) — A federal judge has rejected President Donald Trump’s attempt to quash a subpoena for his tax returns as part of an investigation into hush payments to women who alleged affairs, which Trump long has denied.

The Manhattan District Attorney’s Office had subpoenaed Trump’s accounting firm, Mazars, for eight years worth of the president’s personal and business tax returns.

The investigation is looking into bank and tax fraud, according to previous court filings.

Trump had argued he had immunity against the subpoena, but the U.S. Supreme Court ruled in June that he was not immune from state criminal investigations.

Asked about the ruling at an Oval Office photo op Thursday, Trump said, “we’ll probably end up back at the Supreme Court,” dismissing the legal battle as an extension of what he believes is a political “witch hunt.”

“What the Supreme Court did do is say, if it’s a fishing expedition, you — my interpretation is essentially you don’t have to do it. So, we’ll probably end up back in the Supreme Court,” he said.

“This is a continuation of the most disgusting witch in the history of our country. All it is. The Supreme Court said a fishing expedition. This is the ultimate fishing expedition. Nobody has anything. We don’t do things wrong,” Trump said. “This is a disgrace. This should never ever be allowed to happen again.”