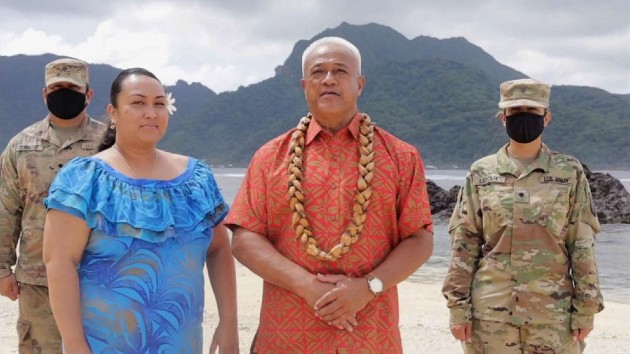 (MILWAUKEE) — American Samoa’s turn during Tuesday night’s video roll call at the Democratic National Convention was noteworthy not only because of the scenic Pacific backdrop, but because of the presence of two junior enlisted Army soldiers who were seen flanking Democratic delegates.

The scene raised eyebrows because U.S. military personnel are not supposed to participate in political events while in uniform, and a Democratic National Convention official told ABC News on Wednesday that “the composition of that shot was an oversight.”

“We’re grateful for the participation of delegations and state volunteers in all 57 states and territories — they made the inspiring roll call we saw last night possible,” the official told ABC News. “The composition of that shot was an oversight.”

“Each state was asked to highlight issues and values that matter most and the American Samoa delegation wanted to highlight their commitment to military service when they filmed their segment,” the official said.

Like all American voters, military personnel can support political candidates and attend political rallies, but they must do so on their own time, and never while in uniform.

A Pentagon spokesman reaffirmed that policy on Wednesday in response to an ABC News question about the incident.

“All members of the Armed Forces, including active duty members, members of the reserve component not on active duty, and retired members, are prohibited from wearing military uniforms at political campaign or election events,” said the Pentagon spokesman.

The soldiers’ name tags were clearly visible on their uniforms, though their faces were covered by face masks used due to the coronavirus pandemic.

American Samoa delivers its delegate votes at the #DNCConvention with what appears to be two uniformed service members in the background, which is potentially a problem. pic.twitter.com/RG581SWZTo

A defense official told ABC News that the presence of the two soldiers will raise questions about how they ended up participating during the roll call as the political restrictions remain in place for all active duty and reserve personnel.

It is unclear what Army unit the soldiers belong to as American Samoa does not really have an active duty Army presence, nor does it have a National Guard. Still, there is a small Army Reserve Center that manages several hundred Army reservists on American Samoa.