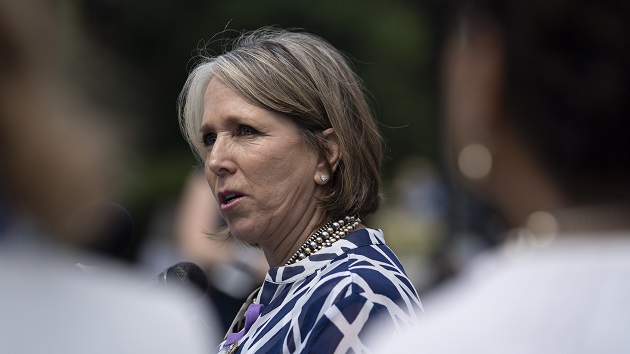 “We need a to develop the relationships with the Hispanic Latino voters and communities in this country, which are incredibly diverse and different… it’s a recognition of who we are, where we came from, how our values have been shaped in each of our communities,” Lujan Grisham told ABC News’ “Powerhouse Politics” podcast. “We didn’t do enough at the convention. We haven’t done enough before. We just need to keep at it.”

Over the weekend, former Democratic presidential candidate Julián Castro, who served as Housing and Urban Development secretary under former President Barack Obama, said he was disappointed that there weren’t more prime time Latino speakers, nor any Native American or Muslim American speakers.

“One of the special things about the Democratic Party when you compare it to the Republican Party is that Democrats have built up this beautiful coalition over the last several years which has helped power it to several victories,” Castro said in an interview on CNN Tuesday night. “We want to cement a relationship with one of the fastest growing communities in the United States… If we want to win up and down the ballot in the years to come, then we have to make sure that there aren’t missteps like only three out of 35 speakers (being Latino).”

Castro’s senior adviser, Sawyer Hackett, tweeted that it was “completely unacceptable that there are as many Republicans speaking at the convention as Latinos.”

Asked whether she agreed with that, Lujan Grisham said that while she wishes more of those voices were highlighted, including that of Castro, who gave the keynote address during 2012’s convention, she said that “this is a completely unique set of circumstances.”

“The vice president’s message is leadership means that we have to build bridges in ways that we didn’t think about ever before, and that means highlighting and recognizing that Republicans want a credible truthful, fair visionary in the White House, and not somebody else and I agree,” the governor told podcast co-hosts Jonathan Karl, ABC News’ chief White House correspondent, and Rick Klein, ABC News’ political director.

She said that even in the current economic crisis, tackling that issue — one of the most important to Democratic voters — can’t be sacrificed, and that’s this moment, with the pandemic and the economic downturn, actually presents an opportunity.

“This is a moral imperative, like protecting people from COVID,” she said, talking about what New Mexico has done to revitalize its energy sector with an “aggressive… transition strategy,” ramping us its wind and solar power use. “This is the place where you can do a parallel — we protect young workers, we engage new technology, we transform the economy, we save the planet, and we can be COVID safe in the way in which we support that energy work.”

Lujan Grisham was one of the women on former Vice President Joe Biden’s running mate shortlist. She spoke about the rigorous — and closely held — vetting process on “Powerhouse Politics.”

“I may not have had the strongest relationship with the vice president, but he was incredibly kind and genuine. He apologized to all of us about how painful (it was) because he knows how that works,” she said. “It is really incredible about the depth of which they figure out what makes you tick, how you got to be where you are and what you did in every component of the course of your personal and professional life since you were in high school.”

The governor had no hard feelings about not being selected to join the ticket, heaping praise on Biden’s choice, California Sen. Kamala Harris, saying she “couldn’t be prouder to have her back, and to talk about what an incredible ticket this really is.”

She also spoke about an issue that’s guaranteed to be at the center of the political conversation through Election Day: voting by mail.

President Donald Trump has claimed without evidence that widespread mail-in ballots will lead to massive voter fraud, ramping up his attacks on the upcoming election Monday by asserting the only way he will lose “is if the election is rigged.”

Lujan Grisham said she thinks her state is “probably more prepared than most states” to handle the expected increase in absentee mail ballots, noting that during the primary there was a 1000% increase in voters opting to cast ballots by mail.

To help alleviate some of that influx, she said the state is putting ballot drop boxes “in as many places, rural and urban, in the state that we can.”

In terms of safeguards for voting by mail, Lujan Grisham noted that every ballot has a unique barcode on it, so the secretary of state’s office is able to track them through every step of the process.

“You’ve got a White House that tells people that there’s massive fraud as an allegation that is intended… to create voter suppression,” she said. “We’re aware of that and so we’re messaging exactly the opposite to reassure New Mexicans that we’re doing it right, we have a professional process…. and frankly, it’s more safe to do it the way that we are doing it.”