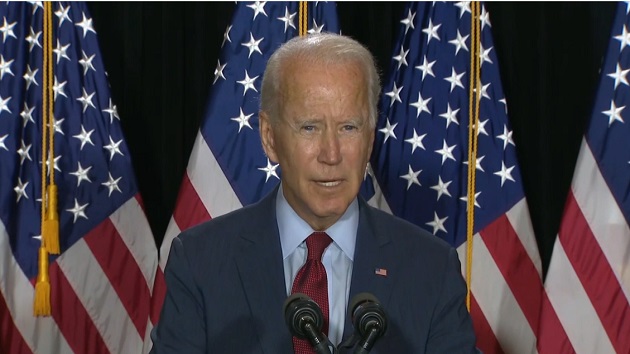 (WASHINGTON) — Former Vice President Joe Biden on Thursday called for immediate mask mandates nationwide for the next three months, keeping the focus on drawing a stark contrast between how he would respond to the pandemic crisis compared to how he says it’s been mishandled by President Donald Trump.

“Today I want to talk about one thing, very straightforward. It doesn’t have anything to do with Democrats, Republicans, or Independents. It has to do with a simple simple proposition,” Biden said in remarks following a coronavirus briefing with his newly-minted running mate, Sen. Kamala Harris, continuing the main attack line he and Harris started making in their nationwide debut on Wednesday.

It’s not lost on the Biden-Harris campaign that it took the president two months to wear a mask in public after he first announced the Centers for Disease Control and Prevention guidance on the practice in a news conference.

Calling on every governor to issue a mask mandate in their state, Biden said he hopes the president has “learned the lesson” now that masks save lives but added it’s not about politics.

Harris, speaking after Biden, said the call for a mask mandate “real leadership.”

“What real leadership looks like is Joe Biden. To speak up. Sometimes, telling us the stuff that we don’t necessarily want to hear, but we need to know,” Harris said.

"The thing about Joe that the American people know is that his role of leadership in our country has always been about doing what's best for the people of our country," Sen. Kamala Harris says. https://t.co/f6jjBBNEAX pic.twitter.com/QgCTCL9Csa

Harris also encouraged the public to keep pressure on the Trump administration for a timeline on a vaccine for COVID-19.

“I think it’s important that the American people looking at the election coming up, ask the current occupant of the White House, ‘When am I going to get vaccinated?"” she said. “Because there may be some grand gestures offered by the current president, about a vaccine, but it really doesn’t matter until you can answer the question.”

Heading into the election, the coronavirus is an issue at the top of the ticket for many voters — and Democrats want to highlight to voters how they say their ticket would handle the deadly pandemic better than the president.

Earlier Thursday, inside a makeshift, television-like studio at a hotel in downtown Wilmington, Delaware, Biden and Harris participated in their first joint COVID-19 briefing with health care experts over a video call as deaths from the virus rise in the United States.

Seated at spaced-out tables that faced one another before a large screen that featured at least four doctors — at least some of whom have been regularly briefing Biden for the last four months — the candidates briefly spoke with reporters before their later remarks.

“These are some of the brightest minds, not only in our country but internationally. And as the vice president has been saying since the beginning of this pandemic it should be the public health professionals that are leading policy in our country to address this lethal pandemic,” Harris told reporters.

The Biden-Harris campaign presented the event as two briefings in one that will address both the public health crisis and the economic downturn from the pandemic — with former Federal Reserve Board Chair Janet Yellen appearing as a part of the group briefing the candidates on the economy.

Biden later said the briefing focused on the disproportionate impact of COVID-19 on different races and the availability of PPE and testing capacity.

The events come one day after Biden and Harris’ first joint appearance as running mates in which the pair slammed Trump’s response to the coronavirus crisis.

“This virus has impacted almost every country, but there’s a reason it has hit America worse than any other advanced nation. It’s because of Trump’s failure to take it seriously from the start,” Harris said Wednesday, the same day the U.S. reported its highest number of deaths from coronavirus in a single day since mid-May.

Biden called out Trump for touting himself as a dealmaker yet taking to the golf course instead of working across the aisle on a coronavirus relief deal for Americans while negotiations hit an impasse “like every other president has done in a crisis, to get Americans the relief they need and deserve.”

Together the two hit on the president’s mixed messages on the virus since it arrived on U.S. soil.

Trump continued to hold mega-rallies through June, despite warnings from health care experts to limit group events, especially indoors, due to social distancing concerns, and he largely stopped holding public coronavirus briefings at the end of April, until recently reviving them three months later in late July amid poor polling numbers.

The federal government still largely lacks a national strategy on reopening schools, a point the Biden and Harris campaign are likely to seize on, while Trump continues the push for full in-person instruction.

Harris on Wednesday took a quick swipe at Trump on schools calling the current state over when and how to reopen “complete chaos.”

Both campaigns also have the challenge of delivering acceptance speeches in the time of COVID-19, largely without the pomp and circumstance of previous years.

The Biden campaign confirmed Thursday that Biden and Harris will both give their acceptance speeches for the Democratic National Convention at the Chase Center, a large event space on the waterfront in Wilmington, Delaware.

Trump said he’ll deliver his acceptance speech from the White House of the battlefield of Gettysburg, Pennsylvania, despite criticism to both venues.

And in spite of the Democratic National Convention making the move to have all its speakers appear virtually instead of in Milwaukee, Wisconsin, Trump announced he would travel to Wisconsin Monday, the first day of the DNC.

“I’ll be there, as a matter of fact, on Monday and many times throughout the campaign and beyond,” Trump said on a tele-rally with supporters Wednesday night.