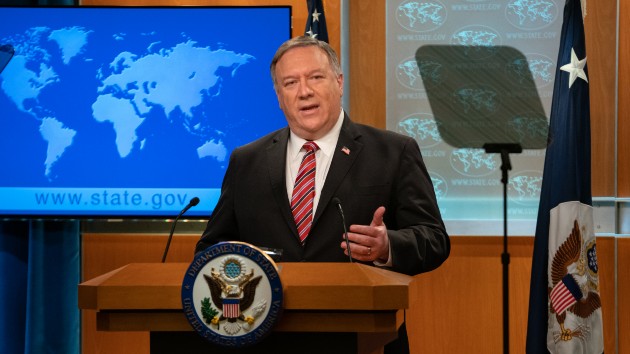 (WASHINGTON) — A new report from the State Department’s federal watchdog found that Secretary of State Mike Pompeo was within his legal authority to bypass Congress and approve $8.1 billion of arms sales, but it is not the “full” vindication that the top U.S. diplomat says it is.

The report from the State Department’s beleaguered Office of the Inspector General (OIG) has been highly anticipated, as the investigation may be one of the reasons why Pompeo had former inspector general Steve Linick fired in May.

At the request of Democratic lawmakers, the OIG probed Pompeo’s use of an emergency authority in May 2019 to sell weapons, ammunition and training to Saudi Arabia and the United Arab Emirates, who are fighting rebels in neighboring Yemen, even after members of Congress had objected to them and placed holds on their approval.

The State Department took the rare step of briefing journalists Monday, the day before the report was released to the public. A senior State Department official said the report found “the department acted in complete accordance of the law and found no wrongdoing in the administration’s exercise of the emergency authorities.”

But that’s not entirely true. The report said Pompeo’s “emergency certification was executed in accordance with the requirements of the” law, but it faulted the department for not meeting its requirement to “fully assess risks and implement mitigation measures to reduce civilian casualties.”

It also made clear that the OIG was not rendering a judgment on whether there was an “emergency” dire enough to legitimize the use of this special authority, which is relatively rare.

“No one ever doubted that the law provides for the authority to expedite the sale of weapons in the case of an emergency. The question was always, ‘Did the administration abuse that authority in order to ram through more than $8 billion in sales to Gulf countries?"” said House Foreign Affairs Committee chair Rep. Eliot Engel, D-N.Y., after the report’s release Tuesday. “This report tells us everything we suspected: The emergency was a sham. It was cooked up to get around congressional review of a bad policy choice.”

The department’s justification to Congress last year was the pressing threat of Iranian attacks and weapons in the region, particularly in Yemen, where it backs the Houthi rebels against the Yemeni government propped up by the Saudi coalition. That May, Iranian vessels attacked oil tankers in the Persian Gulf with mines, according to the U.S., amid Houthi rocket and drone attacks into Saudi territory.

Democratic lawmakers like Engel have also seized on the report’s finding that only four of 22 packages Pompeo authorized had been delivered by the time the report was concluded in December 2019.

In a statement to the OIG included in its report, R. Clarke Cooper, the top State Department official for arms sales, said, “The most critical deliveries… occurred in the near-immediate aftermath of the certification,” but he didn’t provide an update on how many packages had been delivered since then.

Cooper also pushed back on the OIG’s main concern — that the department didn’t properly take into account its obligation to ensure U.S.-sold weapons didn’t kill or injure civilians. The Saudi-led coalition’s airstrikes have caused the majority of civilian casualties, according to the United Nations, and many of those weapons, particularly precision-guided munitions or “smart bombs,” are American-provided.

Beyond the $8.1 billion of emergency arms, the Trump administration has also authorized since January 2017 $11.2 billion of arms in smaller packages that did not require congressional approval — bypassing possible obstruction through another technically legal process, including with more smart bombs.

“The department carried out, and continues to carry out, due diligence on all sales to the standards required by law” and acted within its authority on the smaller transfers, Cooper told the OIG.

Cooper has played a central role in the fight, testifying before the House last June, and Democrats attacked him Tuesday, accused him personally of lying.

“This report confirms what we already know: This Administration has no qualms about lying to the American people. Rarely, however, are those lies so blatant and so dangerous as this one,” said Rep. Andy Levin, D-Mich., who questioned Cooper during that hearing last year.

In the face of Democrats’ outrage Tuesday, Pompeo again said the report had “fully vindicated” him and his staff, turning as he has repeatedly to attack Democratic lawmakers: “I’m sorry that @RepEliotEngel and @SenatorMenendez misuse their committees for political games,” he tweeted.

Pompeo declined to be interviewed for the report, citing his travel schedule, according to the OIG. While its investigation wrapped in December, it did not release the report as it sought that interview and then because of restrictions on personnel due to COVID-19.

Pompeo, who later submitted answers in writing to the OIG, had President Donald Trump fire the inspector general under whom the investigation began, Steve Linick. Calling him a “bad actor,” Pompeo at one point seemed to cite the OIG probe of the emergency arms sales for his ouster.

“He was investigating policies he simply didn’t like. That’s not the role of an inspector general. This didn’t have anything to do with retaliation. This was about an IG who was attempting to undermine the mission of the United States Department of State,” Pompeo told Fox News on May 28.

After Linick was fired, Trump tapped a Stephen Akard, a longtime aide to Vice President Mike Pence, to fill in as acting inspector general. But Akard, who also retained his title as director of the State Department’s Office of Foreign Missions, resigned from both positions last week after less than three months on the job.

Akard had recused himself from this probe, with Diana Shaw, his former deputy and the new acting inspector general, signing off on the final report.

Hummer EV truck shows it can compete with its gas-powered rivals
Howard University students protest housing conditions with on-campus tent city
Truth Social could provide Trump with infusion of cash — but critics are concerned about its content
Justice Department says Utah school district ignored racial harassment, abuse
Supreme Court to take up Texas abortion law but declines to block it
In push to get deal, Biden pulls back curtain on spending negotiations with Democrats