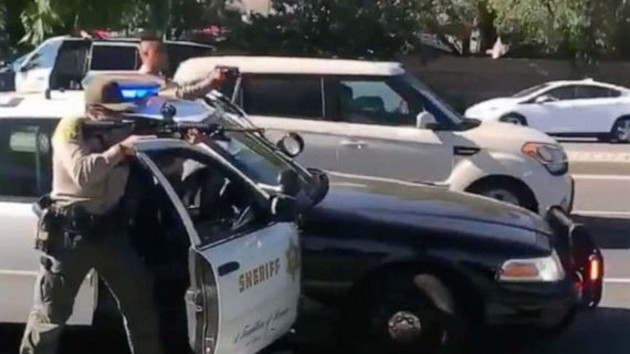 (LOS ANGELES) — The Los Angeles County Sheriff’s Department says it is investigating an incident last week in which deputies were recorded on video pointing their guns, including at least one rifle, at a pair of unarmed Black teenagers who witnesses said had been the victims of a crime.

In video of the incident, which occurred Friday around 5 p.m. in Santa Clarita, about 30 miles north of Los Angeles, deputies are seen brandishing their weapons at the two teens while onlookers plead with the deputies to stop.

The Los Angeles County Sheriff’s Department told ABC News a caller reported two Black men in their 20s were fighting and hitting a man with a skateboard, and the call was dispatched as an “an assault with a deadly weapon.”

But in a video of the incident posted to Instagram, witnesses told the officers that the two teens were actually victims of a crime and had only been defending themselves after they were attacked.

The video was posted by Tammi Collins, the mother of one of the teens, who did not take the video herself. Collins wrote in her post that her son and another teen were confronted by someone who was allegedly homeless.

“The guy became so aggressive that he took his shirt off pulled out a knife and whip them tried to stabbed [sicthem,” Collins wrote. “His friends only had their skate boards to cover them from the knife and whip so they held it out to keep distance from this guy.”

When deputies arrived, they tried to secure the scene by detaining possible suspects who matched the caller’s description, the sheriff’s department said. The teens were held at gunpoint and released after the deputies determined what had unfolded.

In the 11-minute video, the deputies are seen with their handguns drawn and at least one officer points a rifle at the teens while their hands are in the air. One deputy asks the person filming to get out of the way. Bystanders are heard shouting at the deputies to put their guns down and diffuse the situation.

“It was the other guy,” someone is heard shouting. “They didn’t do nothing at all.”

Although deputies briefly detained the two teens, there were no arrests, according to the sheriff’s office.

In a video message posted on Twitter Tuesday, Los Angeles County Sheriff Alex Villanueva said he saw the video, which went viral on social media, and that the incident is under investigation.

“I have concerns about the tactics deployed,” Villanueva said in his video.

Late Tuesday, the Sheriff’s Department announced on social media that they would also be reviewing their policies governing the use of the AR-15 rifle, one of which was utilized in the incident.

Santa Clarita Mayor Cameron Smyth said in a statement he was also concerned about the incident and ordered that the investigation be expedited.

“In addition, we have asked that the deputy be removed from the field pending the outcome of the investigation,” he said in a statement.