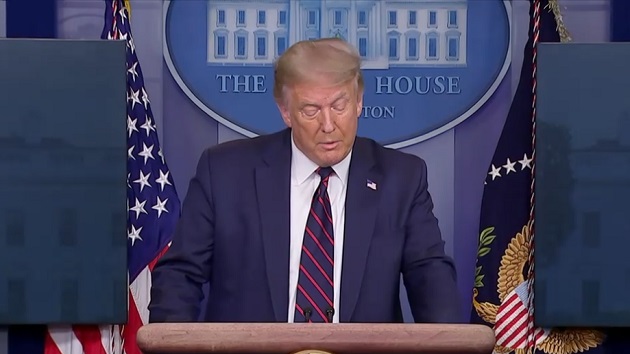 (WASHINGTON) — President Donald Trump on Tuesday again advocated for college football in the fall, falsely claiming that coronavirus “just attacks old people” and that young, healthy college athletes are “not going to have a problem.”

“People don’t realize it’s a tiny percentage of people that, that gets sick,” he said in an interview with ‘Outkick’ on Fox Sports Radio. “It just attacks, old people, especially old people with bad heart, diabetes, or some kind of a physical problem.”

A few hours after Trump’s comments, the Big Ten Conference announced the “postponement” of football and all other fall sports, including all regular season and tournament contests, after consulting with doctors and an advisory council.

“Our primary responsibility is to make the best possible decisions in the interest of our students, faculty and staff,” said Morton Schapiro, Chair of the Big Ten Council of Presidents/Chancellors and Northwestern University President.

Other major conferences could follow suit. The Big 10 decision was made amid concerns about the coronavirus and lingering long-term effects, including a rare heart condition that identified in several college athletes.

Eduardo Rodriguez, a 27-year-old star pitcher for the Boston Red Sox, was recently diagnosed with myocarditis, heart inflammation that team doctors believe stemmed from his COVID-19 infection, and will not play for the rest of the Major League Baseball season.

While older Americans are considered more vulnerable to COVID-19 and the mortality rates for younger people remains low, hospitals have seen a growing number of younger patients admitted with severe symptoms throughout the summer as the virus has spread across the country.

Public health experts and medical officials have also warned about the potential for long-term health effects from COVID-19 given how little is known about the novel coronavirus. And, officials are concerned that young people who do become infected but don’t exhibit symptoms are spreading the virus to other, more vulnerable individuals.