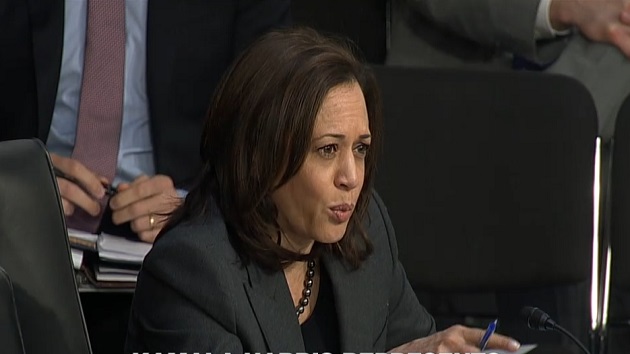 Biden announced the decision in an email to supporters.

“I know a thing or two about being Vice President. More than anything, I know it can’t be a political decision. It has to be a governing decision. If the people of this nation entrust me and Kamala with the office of President and Vice President for the next four years, we’re going to inherit a nation in crisis, a nation divided, and a world in disarray. We won’t have a minute to waste. That’s what led me to Kamala Harris,” Biden said in the email.

He also harkened back to the first time he met Harris through his late son, Beau.

“They were both Attorneys General at the same time. He had enormous respect for her and her work. I thought a lot about that as I made this decision. There is no one’s opinion I valued more than Beau’s and I’m proud to have Kamala standing with me on this campaign,” he said.

I have the great honor to announce that I’ve picked @KamalaHarris — a fearless fighter for the little guy, and one of the country’s finest public servants — as my running mate.

Soon after the announcement, the Biden campaign announced the pair would deliver remarks in Wilmington, Delaware, on Wednesday.

As the vice presidential search wore on against the backdrop of racial tensions and social change, Biden was frequently questioned about whether he would choose a woman of color as his running mate.

By choosing Harris, who is Black and Indian American, Democrats are sending a powerful and historic statement ahead of the November election as the nation continues to grapple with social change. If elected, Harris would not only be the first woman to serve as vice president, but would also be the first person of color to be second in command and the highest-elected Asian American in history.

In the Senate, Harris serves on the Homeland Security and Governmental Affairs Committee, the Select Committee on Intelligence, the Committee on the Judiciary and the Committee on the Budget. Her tough questioning of Supreme Court Justice Brett Kavanaugh was one of the instances that increased Harris’ popularity among Democrats on a national level.

In recent months, Harris advocated for legislative policies aiming to alleviate the aftershocks millions of Americans felt in the wake of the novel coronavirus. She also drew on her experiences as a woman of color to call for change in the aftermath of George Floyd’s death. Recently, Harris, along with her colleague and former presidential campaign trail rival, Sen. Cory Booker, gave emotional arguments in favor of making lynching a federal crime. The pair, along with other high-profile Democrats, also introduced legislation to make Juneteenth a national holiday.

During the Democratic primary campaign, Harris — the sole Black woman in the running — was amplified as a top contender following a debate performance in which she took Biden to task over his past stances on busing policies.

“There was a little girl in California who was part of the second class to integrate her public schools and she was bused to school every day. That little girl was me,” Harris said at the time.

“She is a first-rate intellect, a first-rate candidate and a real competitor,” he told reporters at an event in Iowa last year. “I have mixed emotions about it because she is really a solid, solid person and loaded with talent. I’m sure she’s not dropping out on wanting to make the changes she cares about.”

Harris suspended her presidential campaign in early December, and endorsed Biden after his Super Tuesday sweep.

She served as a top surrogate for the Biden campaign amid the pandemic landscape and was one of his top fundraisers. With traditional campaign events severely limited due to safety concerns, Harris participated in a variety of virtual events to back Biden, including roundtable discussions, state-specific appearances and even a virtual concert fundraiser featuring high-profile DJs.

Harris’ entry to the presidential campaign is likely to see criticism from some social activists who do not feel that she could serve as an agent of change for policing reform given her past record as a prosecutor, a notion Harris adamantly pushes back against.

“This is simply wrong, it’s just absolutely wrong. When I was attorney general of California, I instituted one of the first requirements that law enforcement officers receive training on racial implied bias and procedural justice,” Harris said during a cable news interview in June.

“I’m the first that created a whole division and approach, that actually became a national model,” she added.

Illinois Facebook users tagged in photos can now submit claims as part of $650 million settlement
Amy Schumer rejoices as son Gene says “mom” for the first time
Airlines under scrutiny over mask policies as parents with toddlers get kicked off flights
GOP report: No wrongdoing in Biden son ties to Ukraine firm, but still ‘problematic’
Beta remnants to soak South as wildfires still rage in West
Trump argues his nominee needed on Supreme Court in time to vote on election legal challenges