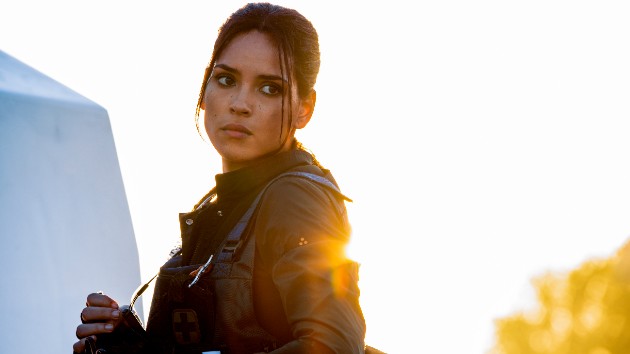 (LOS ANGELES) — Actress Adria Arjona, recently seen in Netflix’s hit Ryan Reynolds action film 6 Underground, will soon be going to that galaxy far, far away, according to a report from Deadline.

The publication says Arjona has been cast opposite returning player Gabriel Luna in the Disney+ prequel series Star Wars: Rogue One.  The series centers on Luna’s Rebel spy character Cassian Andor, introduced in the 2016 film.

Tony Gilroy, who co-wrote Rogue One, is returning to write the pilot for the show, and direct some episodes as well.  Alan Tudyk, who motion-performed Cassian’s towering droid sidekick K-2SO will also return, as will Genevieve O’Reilly, who played Rebel Alliance leader Mon Mothma in the film.

Marvel movie vet Stellan Skarsgard and Poldark’s Kyle Soller also are on board, but Disney is officially mum on their characters — or, for that matter, the report of Arjona’s casting.

Even before The Mandalorian earned 15 Emmy nominations, Disney+ was forging ahead with other small-screen projects in the Star Wars universe, including a much-anticipated Obi-Wan Kenobi series starring returning Jedi Ewan McGregor.

‘Cake Boss’ star Buddy Valastro recovering from freak bowling accident that left him with impaled hand
Coronavirus uptick in 6 NYC neighborhoods is ’cause for significant concern,’ city says
Mark Wahlberg’s company donates over one million masks to US schools
Netflix releases trailer for horror series ‘The Haunting of Bly Manor’
All but one endangered GOP senator back Trump’s Supreme Court push after RBG death
We’ve hit 200,000 COVID-19 deaths in 6 months. What will the next 6 months look like?