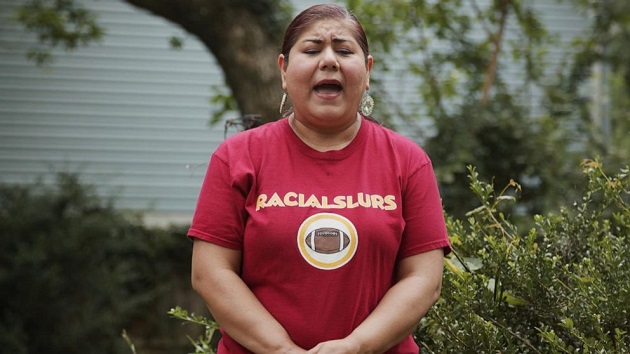 (WASHINGTON) — Deep in the woods on the outskirts of Accokeek, Maryland, lives Billy “Redwing” Tayac, 80, the chief of the Piscataway Indian Tribe.

His family, as he likes to say, is not from Maryland, Virginia or Washington D.C., they are from the Chesapeake Bay region.

Issues like calling their home by the native Indigenous terms, is just one of the several issues that Chief Tayac has fought for what he says has been his entire life.

Hailing from five generations of activists, if you live in the area, Chief Tayac may look familiar. Since the mid-1980s, Chief Tayac has been at the forefront of protests on getting Washingon’s NFL team to change their name. On July 13, the team announced it was changing its name to the Washington Football Team during the 2020-2021 season.

“The name is racist that’s what you’ve got to understand,” said Chief Tayac. “Don’t believe what I tell you, look it up in Webster’s Dictionary for the Washington Football Team. I don’t like to say the word, but it’s Redskin. See what it means. It’s a racial slur for Native Americans. It’s derogatory.”

For Chief Tayac, it’s hard being a football fan, especially when his hometown team’s name and mascot “hurts” him. He has no merchandise of the D.C. football team except one thing, a magnet on his refrigerator that reads “Love the team, hate the name,” and that’s exactly how Chief Tayac says he feels.

And growing up in the area, he says it was hard for him to celebrate victories like the Super Bowl or attending parades when all you see is the term written on hats, jackets and other accessories.

“Like I said, I led the demonstrations in the 80s and I was one of the original plaintiffs for this name here and it hurts,” Chief Tayac said. “It’s a racist term. Let’s bury all these racist terms once and for all. We are all God’s children, let’s treat everybody as equal.”

And although Chief Tayac may not be protesting in the field as he would in his younger days, the next generation of activists like Mary Phillips from the Laguna Pueblo/Omaha Tribe has carried the torch and continues to fight for the name change. Phillips refers to the name as the “R” word and wishes that no one says it or uses it even if it said regarding the football team.

“Because it’s a word that conjures up so many horrible thoughts,” said Phillips. “And it is a slur towards Native Americans for those who still haven’t heard that but it’s a slur.”

Phillips adds it is very difficult to educate fans or people who celebrate Washington football because oftentimes fans do not understand or know the history of the word.

“And so it’s always been, you know [difficult], trying to educate people to understand that this word, this team celebrates actually celebrates the color of my skin by saying that it is red,” Phillips said.

“And therefore we can call you this name from history that proves that you are worth $200,” Phillips said. “Your head, your scalp is worth $200 and people would hunt you down for that. And fast forward to today, why is that term even being used at all?”

Regarding the D.C. football team, some slight progress has been made, some say. The statue of former team owner George Marshall, who opposed desegregation and whose team was the last to integrate Black players, has been removed and the team has decided to refer to the team as the Washington Football Team for now. A battle that longtime owner Daniel Snyder has fought for years. Snyder wanted to keep the team’s original name despite how some fans and indigenous locals like Chief Billy, felt. According to Chief Billy, it was not about “political pressure” or how people felt, for Snyder, it was about losing advertisements. Companies like Nike, FedEx, and Pepsi Cola threatened to pull advertising, and Snyder and the team dropped the nickname days later.

“With Mr. Snyder, what put the pressure on him to change the name? Money talks and that’s what he realizes. And he realizes that he’s fighting a losing battle. And that’s the bottom line,” said Chief Tayac.

In July, the team released a statement regarding its decision to stop the use of the name and logo until a new name is selected.

“On July 3rd, we announced the commencement of a thorough review of the team’s name. That review has begun in earnest. As part of this process, we want to keep our sponsors, fans and community apprised of our thinking as we go forward,” the team said in a statement last month. “… we are announcing we will be retiring the Redskins name and logo upon completion of this review.”

But for Phillips, she says there is still much change that needs to happen in order to truly put an end to the term.

“It’s not debatable,” said Phillips. “And so it should never have been used as a casual word, much less for a team name and then celebrated and then plastered everywhere on this building, on the FedEx building, on every aisle you go down in a grocery store, you see the face, the logo, the word.”

“In the grander sense of things, it’s so evaporating from people’s minds that they don’t even realize how racist it really is,” she said.

Chief Tayac said he wants people to know that even after the name change, the fight is not over. For Native Americans, their fight will always continue, he says.

“We didn’t die in 1890 as a race of people. We’re still here. That’s God’s will. Whether anybody likes it or not, I’d like to say this is our country. This is where God put us there. And nobody is gonna shove off of it,” said Chief Tayac.

“We survived the genocidal practices of the United States government, the cultural genocide practice of people. And you know what, we’re still here? That’s what I can say. And I’m proud to be an Indian.”