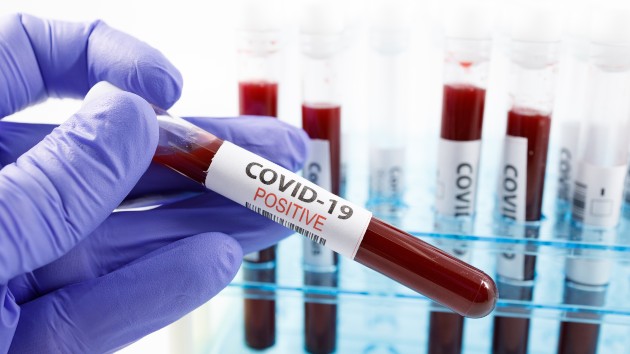 (NEW YORK) — A pandemic of the novel coronavirus has now killed more than 707,000 people worldwide.

Over 18.7 million people across the globe have been diagnosed with COVID-19, the disease caused by the new respiratory virus, according to data compiled by the Center for Systems Science and Engineering at Johns Hopkins University. The actual numbers are believed to be much higher due to testing shortages, many unreported cases and suspicions that some national governments are hiding or downplaying the scope of their outbreaks.

Since the first cases were detected in China in December, the United States has become the worst-affected country, with more than 4.8 million diagnosed cases and at least 158,256 deaths.

France on Wednesday reported its highest single-day rise in coronavirus infections in more than two months amid concerns about a resurgence in Europe.

According to data published by France’s national public health agency, the country recorded 1,695 new cases in 24 hours, the largest daily increase since May 30 when 1,828 new cases were identified in a 24-hour reporting period.

Meanwhile, the number of COVID-19 patients in hospitals and intensive care units across France has decreased over the past 24 hours, according to the agency’s data.

Overall, more than 194,000 people in France have been diagnosed with COVID-19 since the start of the pandemic. At least 30,305 of them have died — the third-highest death toll in Europe, according to the agency’s data.

John Nkengasong, director of the Africa Centers for Disease Control and Prevention, warned Thursday that “we cannot at all exercise fatigue” in the response to the coronavirus pandemic, as the number of confirmed cases on the African continent nears one million.

More than 992,000 confirmed cases of COVID-19 have been reported across the continent of 1.3 billion people since the start of the pandemic, with more than half in South Africa, according to the latest data from the Africa CDC.

A tally kept by Johns Hopkins University shows South Africa with the fifth-highest number of diagnosed COVID-19 cases in the world.

Africa has seen an 11% jump in cases over the last week, which is lower than in recent weeks, but Nkengasong cautioned that the data must be observed over several weeks to determine the real trend.

Nkengasong also noted concerns over the low rate of testing across the continent and the rising number of cases in several African nations including Ethiopia, Kenya and Sudan. He said if countries do the right things to prevent further spread of the virus, “we have a good chance of beating back this pandemic.”

The number of COVID-19 tests being conducted across the United States has apparently taken a plunge.

A total of 664,272 tests were conducted around the country on Wednesday — the lowest figure since July 8, according to data collected and analyzed by the COVID Tracking Project, a volunteer organization launched from The Atlantic.

The group attributed some of the drop in testing to technical issues with reporting systems as well as storm-related closures in some states.

“Still, the problem is broader. Weekly testing declined for the first time ever in our dataset,” the COVID Tracking Project wrote in a series of posts on Twitter. “There are widespread problems right now in the top-level data. In different ways, California and Florida have had trouble reporting complete data because of storms and IT problems. Because they are populous states with large outbreaks, that influences the national numbers.”

6:03 a.m.: Number of babies testing positive has nearly doubled in this Texas county

The number of babies testing positive for COVID-19 in Nueces County in southwest Texas has nearly doubled since mid-July, according to a report by Corpus Christi ABC affiliate KIII-TV.

Since the start of the pandemic, a total of 85 children under the age of 2 had tested positive for the virus in Nueces County by mid-July. Now, that number is “close to 167,” according to Annette Rodriguez, health director of the Corpus Christi Nueces County Public Health District.

“That number has almost doubled and that hasn’t been a very long time period,” Rodriguez told KIII.

A disproportionate number of non-white children are dying from the novel coronavirus in the United States, according to data released in an internal memo from the Federal Emergency Management Agency obtained by ABC News on Wednesday night.

Nationwide, the number of COVID-19 cases among people under the age of 18 from March 1 to Aug. 3 were 40% Hispanic, 34% white and 19% Black. The ethnicity breakdown of those patients who died from the disease is 38% Hispanic, 34% Black and 25% white, according to the memo.

The gender breakdown of those cases is 50% male and 50% female. However, just as in adults, COVID-19 is more fatal among males under 18, making up 64% of the deaths compared to females under 18 accounting for 36%, according to the memo.

More than 52,000 new cases of COVID-19 were identified in the United States on Tuesday, according to a count kept by Johns Hopkins University.

It’s the second straight day that the United States has recorded over 50,000 new cases. However, the latest daily caseload is still under the country’s record set on July 16, when more than 77,000 new cases were identified in a 24-hour reporting period.

A total of 4,823,892 people in the United States have been diagnosed with COVID-19 since the pandemic began, and at least 158,256 of them have died, according to Johns Hopkins. The cases include people from all 50 U.S. states, Washington, D.C., and other U.S. territories as well as repatriated citizens.

However, new data suggests that the national surge in cases could be leveling off, according to an internal memo from the Federal Emergency Management Agency obtained by ABC News on Tuesday night. Nationwide, the last week saw a 9.2% decrease in cases from the previous seven-day period. There was also a 7% increase in new deaths compared to the previous week, but the figure is lower than the 20-30% week-over-week increase the country has seen of late, according to the memo.