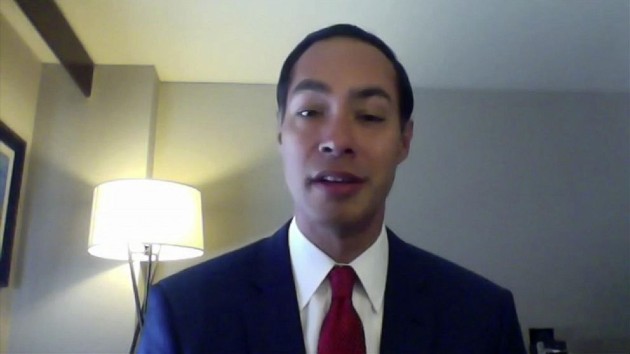 (WASHINGTON) — As the debate rages among politicians and education administrators over the reopening of schools in the coming months, former Democratic presidential candidate Julián Castro, the father of two young children, says he doesn’t feel “comfortable” with the prospect of in-person instruction.

“I know, you know, from everything that we read as parents, that it would be better for them, learning-wise, to be able to be in a classroom with a teacher, but I don’t think that it’s safe right now,” said Castro, whose home state of Texas remains in the midst of a weeks-long surge in both novel coronavirus cases and deaths, in an ABC News Live interview on Monday. “I don’t think it’s safe for the kids and I don’t trust that it’s safe for the teachers and the staff either.”

For the past month, President Donald Trump and his administration have been outspoken in their desire to see schools reopen, even as the pandemic has wreaked havoc in southern states where students typically return to the classroom in August. Vice President Mike Pence and Education Secretary Betsy DeVos visited a North Carolina private school last week that had reopened and DeVos characterized the situation as “not a matter of if schools reopen, it’s a matter of how they do so safely.”

In describing his opposition to the move, the former housing and urban development secretary and San Antonio, Texas, mayor pointed to the impact virus transmission can potentially have beyond those physically in the classroom, foreseeing situations where “the kids may spread it among themselves and come back home to their parents or grandparents and spread it to them.”

Castro was personally affected by the pandemic last month when his stepmother Alice died after contracting the virus. On Monday, he described the impact her death has had upon him and the perspective he’d gained in the aftermath.

“It’s really driven home for me how terrible this virus has been to many families across the country,” Castro said. “Particularly, the circumstances that loved ones have faced because, like my stepmom, you know, they go to the hospital and then oftentimes don’t get to see their family members for weeks if they recover, or perhaps ever.”

The coronavirus has disproportionately affected the United States’ Latino community, of which Castro is a part, whose members are as much as four times more likely than whites to contract COVID-19, according to the Centers for Disease Control and Prevention. That fact took on even greater importance as cases rose in Texas, where nearly 40% of the population is Latino, according to the Census Bureau, the second-highest rate in the U.S.

In response, Castro emphasized the importance of hazard pay to frontline workers, particularly those in heavily Latino workplaces like meatpacking plants, grocery stores, fast food restaurants and farms. He also criticized Texas Gov. Greg Abbot for his handling of the Lonestar State’s initial push toward an economic reopening and state control over local decisions.

“The governor of Texas reopened the state too early, and when he reopened, there wasn’t a sufficient amount of testing or contact tracing, which is what scientific experts tell us you need in order to reopen safely,” Castro said. “On top of that, he is not allowing local communities to tailor their own safety precautions, including mandating that schools reopen.”

“My hope is that, in the least, state leaders will allow local communities, where there is a higher infection rate — like in the Rio Grande Valley, that has a crisis on its hands right now, one of the highest rates of infection in Texas, in the country, and very, very poor level of investment in terms of hospitals and health care — they need to be able to control their own destiny,” he continued.

Castro, whose presidential campaign drew heavily on his housing expertise and featured rental affordability as a centerpiece of his platform, also foresees an eviction crisis developing that could affect nearly 30 million Americans, many of whom are now unemployed due to the pandemic and struggling to make rent payments. An eviction moratorium on federally backed housing expired last week, but Castro argued such programs should continue and advocated for direct rental assistance for those facing a shortfall.

Following the Trump administration’s decision last month to rescind a component of the federal Fair Housing Act that required local municipalities receiving federal money to investigate patterns of racial housing bias, Castro additionally spoke out about the change made by his former department.

“You know, Donald Trump, I think that he believes he’s making a bet that we still live in the 1930s, 40s, 50s, instead of in 2020. He’s trying to take us backward,” Castro said. “And he thinks that if he can just stoke enough resentment and grievance, especially in white Americans, that that might be enough for him to eke out a narrow Electoral College victory like he did in 2016.”

After the rule change — which the administration explained by describing the provision as “unworkable and ultimately a waste of time for localities to comply with” — Trump wrote, in a tweet addressed to “all of the people living their Suburban Lifestyle Dream,” that they “will no longer be bothered or financially hurt by having low income housing built in your neighborhood.”

“Your housing prices will go up based on the market, and crime will go down,” Trump continued, in the tweet characterized as a racist dog whistle by some critics.

“Donald Trump right now is losing the suburbs to Joe Biden. That’s amazing. Because usually Republicans win the suburbs,” Castro said Monday. “That’s why Trump is all of a sudden, you know, using this … to try and drum up fear and resentment among suburbanites.”

“The problem is one of the reasons — one of the main reasons that suburbanites are leaving Donald Trump and the Republicans, is because of his bigotry. They’re tired of the division,” he continued. “So by doubling down on this division and bigotry, I actually believe he’s going to move more people away from him in those suburbs.”

Thank you from 2021 Kids in Business! List of winners and photos/videos
Generational wealth implications: Black and Latino-owned homes are more likely to be undervalued
Let’s-a go! Chris Pratt to voice Mario in upcoming ‘Super Mario Bros’ movie
‘The View’ hosts leave mid-show due to testing positive for COVID-19, miss Vice President Harris interview
Gabourey Sidibe shares the special connection she has to her new podcast thriller ‘If I Go Missing the Witches Did It’
Man attempts to storm cockpit, strangles and kicks flight attendant on JetBlue flight