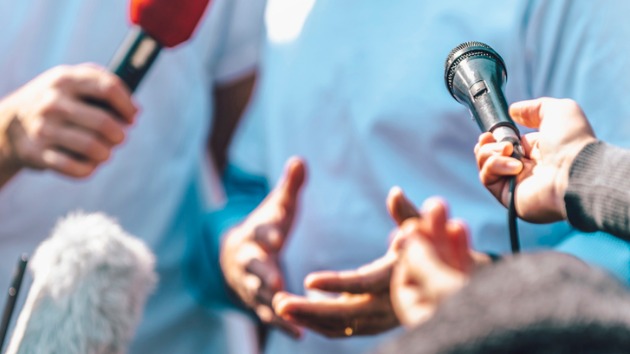 (WASHINGTON) — A senior Department of Homeland Security official has been reassigned, two sources familiar with the matter told ABC News, after The Washington Post reported Thursday that his unit put out three reports to its vast law enforcement network containing two journalist’s tweets about documents that were leaked from the department.

Brian Murphy, the head of the Department of Homeland Security’s Intelligence and Analysis unit, was reassigned Friday night, the sources said.

The Department of Homeland Security on Friday said it would “discontinue” collecting information on members of the press — a practice that experts said was out of the agency’s purview and was alarming and “disheartening.”

“Upon learning about the practice, Acting Secretary Wolf directed the DHS Intelligence & Analysis Directorate to immediately discontinue collecting information involving members of the press. In no way does the Acting Secretary condone this practice and he has immediately ordered an inquiry into the matter,” a department spokesperson told ABC News.

Democrats on the Senate Intelligence Committee sent a letter to DHS on Friday, looking for answers, including whether or not DHS intelligence gathered information of individuals in Portland, Oregon, where there have been clashes between federal agents and protesters.

“Have I&A personnel been indirectly engaged with detainee operations, for example, by providing collection requirements or requests, or suggested lines of questioning, to detaining authorities or otherwise requesting or receiving information related to detainees,” they wrote.

Three former intelligence officials, all of whom served in DHS, however said that practice of collecting information about U.S. citizens is alarming.

“This seems a misguided use of DHS Office of Intelligence and Analysis (I&A) resources on a set of priorities from what they should be. It’s not clear why they issued these open-source intelligence reports,” Javed Ali, who worked on the Trump National Security Council, and in intelligence positions at the FBI and DHS I&A said.

“I just don’t know if that’s the way the DHS authorities were designed to be used–especially against journalists or policy experts who appear to be exercising their First Amendment rights,” he continued.

John Cohen, a former acting undersecretary at the department and ABC News contributor, said this is very troubling for DHS.

“At the very least they have a perception problem, because it would be highly inappropriate for the department or any intelligence community entity to collect and disseminate information on reporters, or U.S. persons who are not involved in criminal and national security-related activity,” Cohen, an ABC News contributor, told ABC news. “And if this was part of an intentional effort, it would be highly inappropriate and wrong.”

A DHS internal document, obtained by the blog Lawfare, justifies the use of broad surveillance powers ostensibly to protect monuments, which has been a priority for the Trump administration during the time of civil unrest after the death of George Floyd at the hands of Minneapolis police.

Elizabeth Neumann the former assistant secretary for threat prevention and security policy in the Office of Strategy, Policy, and Plans the actions by DHS are “disheartening.”

“Yet again we see DHS, taking steps that are outside of the spirit of the intent of what DHS has stood up for. It’s not outside of the letter of the law,” she said. “This is causing damage to the department’s reputation. What were fringe conversations about dismantling DHS that have been around for years, have now become mainstream,” Neumann explained.

Neumann said that it “distracts” the men and women inside DHS from their overall mission.