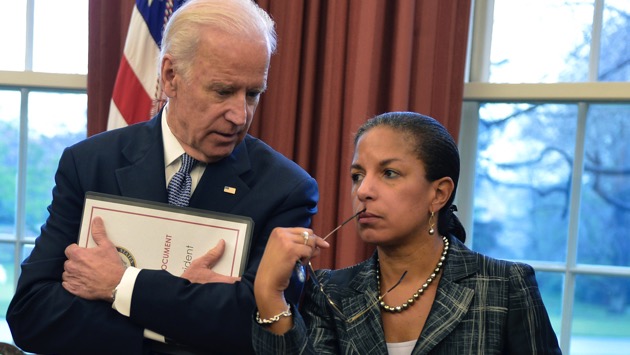 (NEW YORK) — In an interview with the hosts of ABC’s The View on Wednesday, Susan Rice, former national security adviser to Barack Obama and potential vice presidential pick for Joe Biden, slammed President Donald Trump’s response to reports that the Russian government was paying bounties to Taliban affiliates to kill American servicemen and women in Afghanistan.

“He is absolutely a failure as our commander in chief,” Rice said. “And all the while he’s protecting Putin, justifying Russian behavior. In the same interview he said, ‘Well you know China does much worse,’ and then says, ‘And America has done the same thing as the Russians during the Afghan War’ — and it’s just outrageous. Where is our president, our commander in chief standing up for our servicemen and women? He could care less and he’s got some very bizarre very inexplicable reason for always giving Putin the benefit of the doubt and taking steps that benefit Russia at America’s expense.”

Rice also blamed Trump for the surging number of deaths due to COVID-19, citing the fact that Trump disbanded the National Security Council unit, established during the Obama Administration, to plan for pandemic response.

“We prepared the incoming administration with a ‘Pandemic for Dummies’ playbook, and a tabletop exercise, and so many other briefings,” Rice said. “So the fault here — the fault here, the tragic loss of 150,000 Americans and counting, is on Donald Trump and his gross mishandling of this pandemic.”

She also called Trump’s statements indicating that he might not accept the outcome of November’s presidential election “disturbing.”

“Our country rests on the peaceful transfer of power and the recognition that the voters get to decide. So it’s clear that Donald Trump will stop at nothing to try to stay in power,” Rice said.

She later added, “Americans have to decisively reject this corruption and abuse of power at the ballot box. It has to be a resounding defeat of Donald Trump and those in the Senate who enable him to discredit and undermine our democracy.”

During the interview, Rice confirmed that she is under consideration to be Joe Biden’s running mate come November.

“I am apparently among those that are being considered for this important role,” Rice told the hosts.

On Tuesday, Biden told reporters he would have a selection during the first week of August and that he is “trying to figure out” how to meet with contenders in person before he makes his choice.

Rice has foreign policy experience that spans decades, not only as a national security adviser, widely considered one of the toughest jobs in government, but also as U.S. ambassador to the United Nations. She also served on the National Security Council under former president Bill Clinton and as assistant secretary of state for African Affairs within the State Department.

Some Democrats worry selecting Rice for the No. 2 spot could resurrect Republican criticism on the handling of the terror attack at the U.S consulate in Benghazi, Libya.

Following the 2012 attack, Rice, based on intelligence she had at the time, went on several Sunday political television shows and said that the attack was “spontaneous” following protests in the area. The Obama administration later determined it was a premeditated attack.

Congressional investigations, many by Republican-led committees, concluded Rice did not mislead the public with those initial statements. Despite that, some Republicans continued to attack her.

During her appearance on The View Wednesday she defended her actions and called continued Republican attacks of her on this issue “dishonest and a distraction.”

“I don’t doubt that Republicans will use this and they’ll attack whoever is Joe Biden’s choice to be his vice president,” she said.

Biden’s campaign is reportedly vetting, among others, Sens. Kamala Harris of California, Elizabeth Warren of Massachusetts and Tammy Duckworth of Illinois, along with Reps. Val Demings of Florida and Karen Bass of California. He’s under increasing pressure to pick a woman of color.

Many of the women thought to be under consideration, most have held elected office. Rice has not.

If she were to be selected, she would be the first African American woman on a major party ticket in November.