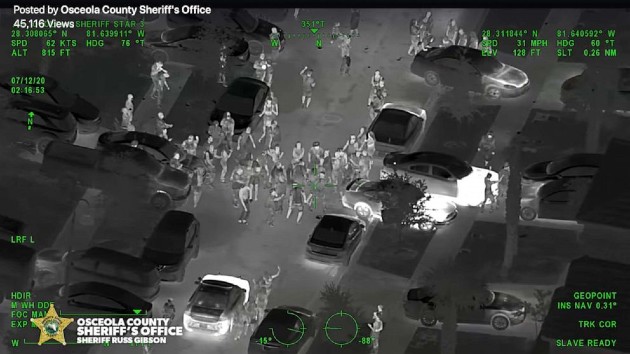 (NEW YORK) — As coronavirus cases continue rising at an alarming rate in parts of the U.S., the notion of parties where guests knowingly try to expose themselves to COVID-19 would seem unheard of — yet they’re reportedly happening.

Such events, deemed “COVID parties” by officials, have made headlines throughout the country.

A particularly startling report came out of Texas: A 30-year-old was hospitalized after he reportedly attended a COVID party, telling nurses there he thought the virus was a hoax, according to an account given by the chief medical officer for Methodist Hospital in a video message, which was obtained by ABC News.

That man is reported to have died at the hospital.

However, the San Antonio health department later said its contact tracers did not have any information “that would confirm (or deny)” that such an event had happened, according to The New York Times.

When asked by the Times about skepticism of the story, Laura Breeden, a spokeswoman for the hospital, said, “I was not there; however, Jane Appleby is our chief medical officer. I believe what she says is true.”

Emily McLoughlin, another spokeswoman for the hospital, told ABC News she did not have further information about such parties beyond what was shared.

In Florida, officials in Osceola County vowed to patrol and break up any COVID parties after aerial footage showed a large gathering in a street.

Beyond the sheriff’s comments, though, there has been little to confirm this is why people had gathered.

A closer look at these parties suggests there’s little evidence the so-called COVID parties are more than just regular parties — and they appear to be few and far between.

In seven of the 14 states that saw a record number of hospitalizations last week, only two health departments — Alabama’s and Florida’s — recorded reports of parties attended by what turned out to be COVID-19-infected individuals.

In Alabama, Arrol Sheehan, a spokeswoman for the Department of Public Health, told ABC News that last month “persons” told the agency that they knew of people who attended a party where “COVID-19 persons were present.”

That information was reported to local authorities, Sheehan said, but she added that the department has no further verification of such parties and no pending cases linked to them.

In Florida, information about the parties was similarly vague.

A spokesperson for the Florida Department of Health told ABC News that they were aware of “media articles” about “COVID parties,” however they did not specify whether or not they themselves had been told of such parties.

The spokesperson also did not respond to ABC News’ questions for further comment.

Both Alabama and Florida officials denounced such parties. In Arkansas, California, Idaho, Mississippi and North Carolina, health officials told ABC News they weren’t aware of any parties but did say they’d heard of them in other states.

Officials in seven other states where hospitalizations recently broke records didn’t respond to requests for comment from ABC News.

Most officials who did respond warned against large gatherings of any kind.

While parties specifically dedicated to exposing oneself to the virus may be limited, there have been cases in which people have attended a party and unknowingly been exposed to the virus.

In Florida, a teenager died of complications from COVID-19 after attending a church event with a hundred other people.

The church event was rumored to be a COVID party, however the church denied that claim and called the reports “absolutely false and defamatory.”

An emergency medicine physician, Dara Kass, wrote on Twitter that no matter what the event was for, “This didn’t have to happen.”

“Regardless of whether or not the point of the event was to get COVID,” Kass wrote, “it was the likely outcome.”

Shootings at graduation parties reminder of gun violence ‘epidemic’ for students, advocates
Electric sports cars are shockingly fast and emissions-free. But will loyalists buy them?
How COVID-19 vaccine policies have triggered lawsuits and workplace showdowns
Father of 8 was set to get 2nd vaccine dose, but contracted COVID-19 and died
Elisabeth Moss’ “first love” is acting, but the director bug bit her hard in Season 4 of ‘The Handmaid’s Tale’
Former ‘Dawson’s Creek’ writer Heidi Ferrer dies by suicide because of ‘long-haul’ COVID symptoms