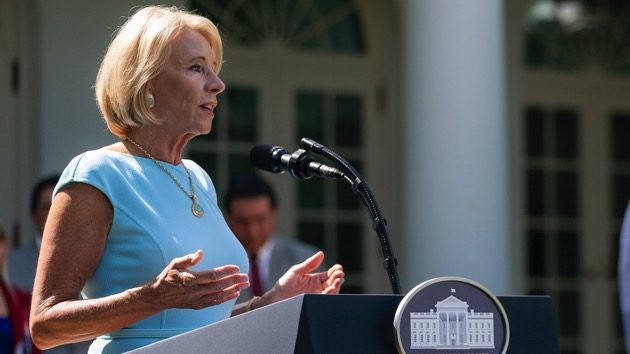 (WASHINGTON) — The NAACP is joining a coast-to-coast legal fight to prevent United States Secretary of Education Betsy DeVos from siphoning away Congressionally approved emergency COVID-19 relief funds from economically disadvantaged public schools, and giving the money to private ones.

The lawsuit contends that the CARES Act, which was signed by President Donald Trump on March 27, specifically says local school departments are to distribute the fund based on the number of Title I, or low-wealth students, in a particular school. Recognizing that some students from low-income families attend private schools, Congress allowed CARES money to go to those institutions that largely depend on tuition and donations.

The lawsuit claims the share going to private schools was supposed to be based on the number of Title I students attending those schools. DeVos, however, had a different interpretation of how local school districts should distribute the money, and in her “interim final rule” said the money should be shared equally with private schools based on the total number of students in those schools, regardless of how many are Title I students.

“The pandemic has harmed all our Nation’s students by disrupting their education. Nothing in the CARES Act suggests Congress intended to differentiate between students based upon the public or non-public nature of their school with respect to eligibility for relief,” reads a guidance document issued by the Department of Education on April 30.

The lawsuit claims the consequences of DeVos’ guidance document would be that hundreds of millions of dollars in CARES Act funds instantly would be diverted from public schools to wealthy, private schools.

“The Rule is as immoral as it is illegal,” the lawsuit states.

Addressing reporters after the policy was contested by public school officials following its announcement last month, DeVos said the funding is separate from other federal aid and was meant to support all students.

The NAACP filed the lawsuit on behalf of a group of parents and their children, who are enrolled in economically disadvantaged public schools. The Pasadena, California, Unified School District and the Stamford, Connecticut, School District joined the NAACP in the lawsuit asking for an injunction to prevent DeVos from immediately instituting her change to the rule.

“In this moment of crushing need for America’s public schools, the Rule directs public school districts to divert desperately needed CARES Act 1 funds to affluent students in private schools or face unlawful limitations on the way that those funds can be spent — both in direct contravention of the Act,” the lawsuit reads. “The Rule harms American children and subverts the will of Congress; it cannot stand.”

Johnson said that if allowed to proceed, the DeVos’ rule change will change public schools, including some where “80, 90 and 99%” of the students are from low-income families.

“She’s trying to increase allocation disproportionately for private schools over public schools in the midst of the debate over whether or not schools should reopen. It’s horrific what she’s doing,” Johnson told ABC News. “What will happen is you further take money away from children who are financially in need to benefit high-wealth children.”

The latest legal action follows a similar lawsuit filed against the Department of Education by California Attorney General Xavier Becerra, which was joined by his counterparts in Michigan, Maine, New Mexico and Washington, D.C. The New York City Department of Education, the Chicago Board of Education, the Cleveland Municipal School District Board of Education and the San Francisco Unified School District have also joined a growing coalition asking the federal court for a preliminary injunction against DeVos’ plan.

The lawsuit was filed a day after DeVos tweeted in support of South Carolina Gov. Henry McMaster’s announcement that his state would be allocating $32 million of CARES Act money to fund grants for low-income students to attend private schools.

In SC today with Governor @henrymcmaster who knows students need to be able to safely return to school this fall and parents need options to make that happen. Thanks to his leadership, $32M in #CARESAct funds will go to low-income SC families to find the right fit this fall. https://t.co/h9HhciFCbo

In a press release that accompanied the announcement by McMaster, a Republican, the governor’s office said, “These one-time, needs-based grants of up to $6,500 will help or subsidize the 2020-21 tuition for eligible students at participating private, parochial or independent schools in South Carolina. Approximately 5,000 grants will be funded.”

DeVos triggered backlash last week by saying she was “very seriously” considering withholding federal funds from schools that fail to fully reopen in the fall despite the coronavirus still sickening Americans in record numbers. In an interview on “Fox News Sunday,” Trump echoed DeVos’ threat.

DeVos’ rule outlines how local education departments must calculate the emergency funds to give an equitable share to students and teachers in private schools.

“There is nothing in the law Congress passed that would allow districts to discriminate against children and teachers based on private school attendance and employment,” DeVos said in a statement issued with her decision.

DeVos said the new rule recognizes that CARES Act money was not exclusively meant to benefit Title I public schools, or schools with large concentrations of low-income students.

She noted that most private schools are under financial strain due to COVID-19 because they’re typically dependent on tuition from families and donations from their communities. She said more than 100 private schools across the country have announced they will not be able to reopen following the pandemic because of shrinking revenue sources.

But Johnson said private schools, including charter schools, have received tens of millions of dollars in emergency COVID-relief funds, including money through the federal Paycheck Protection Program forgivable loan program.

The NAACP lawsuit references a May 5 letter to DeVos from Carissa Moffat Miller, executive director of the Council of Chief State School Officers, objecting to the rule on distributing the CARES Act money, saying the move “could significantly harm the vulnerable students who were intended to benefit the most from the critical federal COVID-19 education relief funds.”

Miller said under DeVos’ rule, for instance, private schools in Louisiana would receive at least 267% more funding under the Department of Education distribution formula.

Chicago Public Schools, which joined a lawsuit filed by the Michigan attorney general, said in a statement that they will lose about $10 million of an estimated $205 million they expected to receive under the CARES Act if DeVos’ allocation plan stands.

“The devastation of the COVID-19 pandemic has disproportionately impacted low-income students of color and the Trump Administration is turning its back on these students in favor of wealthy private institutions by siphoning public funds away from the students who Congress intended to support,” the Chicago Public Schools said in a written statement.

Johnson said the move by DeVos is consistent with her “mission to starve public education and resources to benefit private educational settings.”