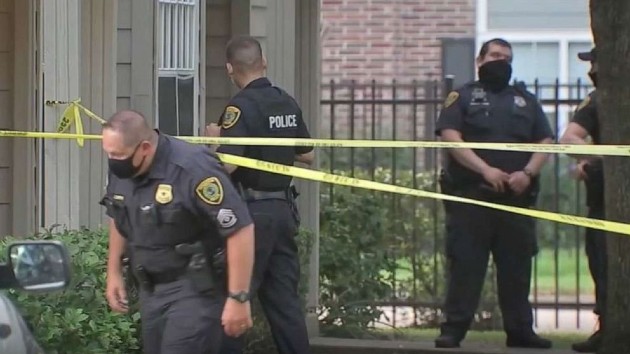 (HOUSTON) — A man has surrendered to police after allegedly kicking down the door to his ex-girlfriend’s house in the early hours of the morning and shooting her to death while she lay with her 4-year-old daughter.

The incident occurred at approximately 4:20 a.m. on July 17 when the suspect, 24-year-old Cedgadrick Adarius Harris, reportedly kicked the door down to the apartment where his former girlfriend, 28-year-old Kimberley Robinson, lived.

“I heard three shots — there was a pop, pop, pop — and I thought maybe somebody was shooting a firecracker. Then I heard it again,” a witness who wished to remain unidentified told ABC News’ Houston station KTRK-TV in an interview.

According to investigators, Harris made his way to the second floor of the home and proceeded to knock down another locked door where he found Robinson and her 4-year-old daughter.

Police told KTRK that six shots were fired, killing Robinson and injuring the little girl who was reportedly hit with shrapnel at least twice. KTRK says she was reported to be conscious and breathing at a local area hospital.

Four other children were downstairs at the time of the shooting, including a 10-year-old who called relatives for help after it happened, Houston Police Lt. Christopher Bruce told KTRK.

None of the other children were hurt and they have all since been placed in the care of relatives.

“I was just praying she was okay,” said the unidentified neighbor, who said he recognized the person who committed the crime and knows the family. “You know, hopefully nothing bad happened to her or the kids, but I knew somebody got hurt.”

Houston Police Sgt. Michael Casso said that the victim had reported at least one domestic violence incident to police about a month ago while neighbors say there has been a history of domestic violence at the apartment.

“This is my second domestic violence related homicide in the last couple weeks,” Sgt. Casso said. “Naturally, when you get people together in quarantine for a long period of time, sometimes tempers flare. I don’t know. He’s been out of this apartment for possibly months, so I can’t say.”

The 4-year-old who was injured in the shooting is expected to be okay.

According to the Houston Police Department’s website, Harris was booked into custody on July 20 and charged with capital murder and assault on a family member. A trial date has yet to be set in this case.