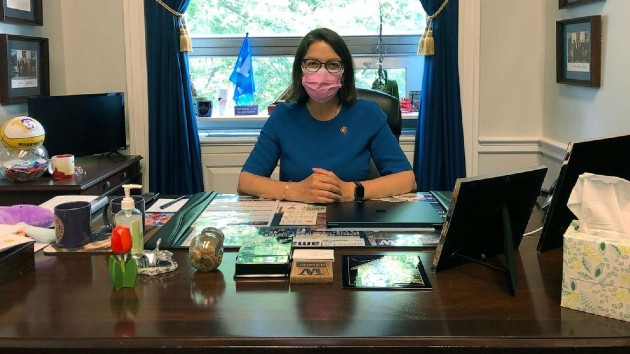 (WASHINGTON) — As President Donald Trump says he’s “getting used to wearing a mask,” Congressional Democrats are launching a campaign Wednesday to wear a pink mask to promote their use amid the worsening COVID-19 pandemic.

Washington Democratic Rep. Suzan DelBene, who is leading the effort on Capitol Hill, said the message she hopes to spread across the country is that “it’s important that we wear masks.”

“We want to make it fun to wear one,” DelBene, D-Wash., told ABC News. “It’s about helping your community, helping your neighbor.”

Any Member of Congress, man or woman, can participate and DelBene has passed out several pink masks to her colleagues who need them. The Democratic Women’s Caucus, which is comprised of all 90 House Democratic women, is helping to promote the pink mask campaign.

DelBene says a member of her staff devised the plan to encourage Democratic members to wear a pink mask and post a picture with the hashtag #OnWednesdaysWeWearPink, borrowing a line from the 2004 American teen comedy, Mean Girls, starring Rachel McAdams and Lindsay Lohan.

She’s hoping the hashtag helps spread the message on social media to “encourage younger folks to wear masks” — particularly since public health officials said younger people have spread the disease in large numbers over the past month.

“We know that more of the recent cases have disproportionally been younger people, so it’s more important than ever to wear a mask,” DelBene said.

Democratic women have often found comradery in their wardrobe, sporting white at the State of the Union for several years to pay homage to the suffragist movement, or most recently sporting Kente cloth stoles to introduce police reform legislation last month.

To express solidarity with the Me Too movement at Trump’s State of the Union address in 2018, the Democratic women of the House wore black clothes with a red pin to commemorate the life of civil rights activist Recy Taylor, who died in December 2017. Taylor was kidnapped and raped in 1944 by six white men who never went to prison.

After spending months downplaying the need to wear a mask and amid sinking support for his response to the COVID-19 pandemic, Trump finally wore a mask in public on July 11 during a visit to Walter Reed National Military Medical Center.

Now, the president appears to have warmed up — at least a little — to wearing a mask, warning that the pandemic “will probably unfortunately get worse before it gets better.”

“We’re asking everybody that when you are not able to socially distance wear a mask, get a mask. Whether you like the mask or not,” Trump told reporters, pulling a mask out of his pocket during a news conference at the White House on Tuesday night. “They have an impact, they’ll have an effect and we need everything we can get.”

For months, countless congressional Republicans have also publicly resisted wearing masks, clashing with Democrats on Capitol Hill, as the issue became a political wedge during the presidential campaign.

Trump poked fun at the presumptive Democratic presidential nominee Joe Biden for wearing a mask in public at a Memorial Day event, brushing off the mask as something that would make him look weak to dictators.

DelBene said she expects the full Democratic caucus to participate in the display, including Speaker Nancy Pelosi and House Majority Leader Steny Hoyer.

“I urge all Americans to wear a mask and do their part to help defeat this pandemic,” Hoyer, D-Md., said. “I thank Rep. DelBene for raising awareness on the importance of wearing a mask to protect others. On Wednesdays, we are proud to wear our pink masks to remind the American people: don’t be mean, wear a mask.”

DelBene stressed that the science shows wearing a mask limits the spread, and is an “easy thing to do” to help everyone else in your community.

“In places where you can’t socially distance, it’s always important to wear a mask,” she said. “If you are in public, or come in close contact with other folks, then wear a mask.”

“Our folks have been wearing masks,” she said. “It will be nice to see a little bit of change and I’m just excited so many are participating.”

While she begged off identifying any Republicans she’d hope to see in a pink mask, DelBene said wearing a mask is “about a collective effort.”

“Anytime I see someone without a mask, I’d love to hand them one,” she chuckled. “Every single one. Any color as long as they’re wearing a mask.”