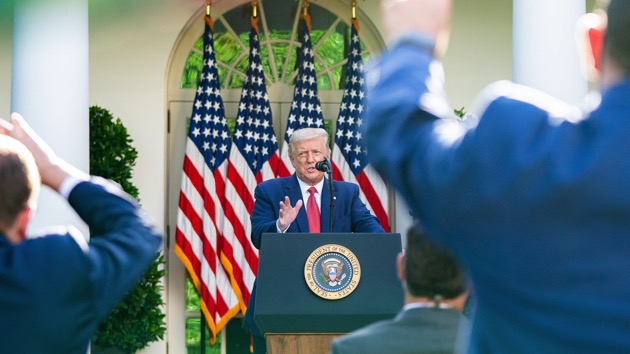 (WASHINGTON) — The briefings are back.

Nearly three months after President Donald Trump stopped holding those near-daily late-afternoon press briefings on the coronavirus at the urging of aides who warned the daily spectacles were hurting his poll numbers, the president on Tuesday is returning to the podium in hopes of rescuing his poll numbers that have dropped even more since.

“Well, we had very successful briefings,” Trump told reporters on Monday. “I was doing them and we had a lot of people watching, record numbers watching in the history of cable television — television, there’s never been anything like it,” calling the timing of what his schedule describes as a 5 p.m. “news conference” a “good slot.”

The president is now looking to regain a daily television audience as he remains largely off the campaign trail amid the ongoing pandemic and on the heels of a new ABC News/Washington Post that shows that six in 10 Americans disapprove of how he’s handling the pandemic, up steeply since the early days of the outbreak.

According to press secretary Kayleigh McEnany, the briefings will once again become near-daily events with the president expected to take a leading role.

“The president may at times bring someone with him, maybe not,” she said, not elaborating on which, if any, public health experts such as Dr. Anthony Fauci might join the president’s for Tuesday’s event.

Vice President Mike Pence, who chairs the coronavirus task force, was traveling to South Carolina Tuesday for a mix of coronavirus and campaign-related events and will not be at the president’s side. But even as Trump stopped participating in task force briefings, Pence has in recent weeks held a number of events where he has taken reporters’ questions on the topic.

As the president prepared to return to the podium Tuesday, he tweeted what is perhaps a preview of his effort to reset the in a morning tweet, writing that “by comparison to most other countries, who are suffering greatly, we are doing very well.”

Despite the president’s insistence to the contrary, the U.S. is actually one of the hardest-hit countries in the world, with the world’s most confirmed cases and one of the highest mortality rates, according to Johns Hopkins University data.

Trump has said he wants to highlight was he says is progress on a vaccine and therapeutics but will take questions as well, which could lead to more of the sparring with reporters that characterized his earlier briefings.

McEnany said the president’s appearance will be “short” — unlike the previous ones where he would sometimes go on for close to two hours — “newsy,” and mostly — but not exclusively — focused on the coronavirus.

“These are short briefings, the president mainly delivering information to the American people that’s needed on therapeutics and vaccines, there will be other information tied into these briefings, we have a lot of plans over the next three months, you’ll be hearing about other topics as well,” McEnany said.

Since the president stopped holding briefings at the end of April not long after being mocked for suggesting injecting disinfectants, the president has looked to move on from the virus and largely shifted his public focus away from the pandemic, even as cases have surged across much of the U.S. in recent weeks.

Over the course of the last month, the president has held only three public coronavirus-related events as he has maintained an otherwise active public schedule. Last week alone, the president held a press conference on China’s crackdown on Hong Kong, an event praising law enforcement, traveled to Atlanta to talk infrastructure, and a flashy South Lawn event to tout efforts to cut government regulation.

He did not hold a single event related to the coronavirus crisis.

When the president does talk about the coronavirus of late, it is usually to blame China for its spread by alleging they could have stopped it, to tout his administration’s response, and to complain about media coverage.

Longtime aide and senior counselor Kellyanne Conway went public with her case of resuming the briefings Friday, telling reporters “the president’s numbers were much higher when he was out there briefing everybody on his day-by-day basis.”

Conway made no effort to disguise the dissension among the president’s advisers on the issue when asked on Fox News why the president stopped holding coronavirus briefings in the first place: “Some people are encouraging him to stop.”

As the president prepared to return to the podium Tuesday, he tweeted what is perhaps be a preview of his message in a morning tweet, writing that “by comparison to most other countries, who are suffering greatly, we are doing very well.”

Despite the president’s insistence to the contrary, the U.S. is actually one of the hardest-hit countries in the world, with the world’s most confirmed cases and one of the highest mortality rates, according to Johns Hopkins University data.