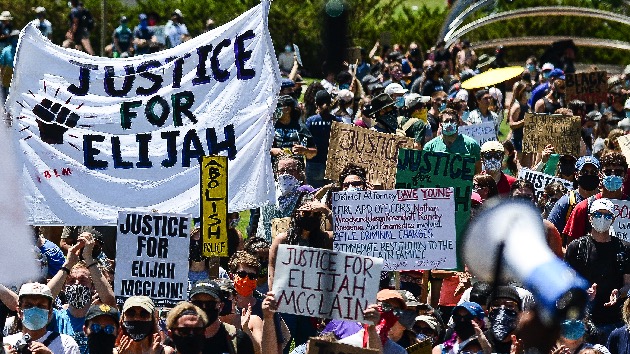 (AURORA, Colo.) — City council members in Aurora, Colorado, unanimously passed a resolution Monday evening allowing for an “independent, unbiased” investigation into the death of Elijah McClain, a 23-year-old unarmed Black man who died after he was apprehended by Aurora, Colorado, police in August 2019.

The resolution stated that a neutral-third investigation is needed “to discern the facts about what transpired that night of August 24, 2019.”

City council noted that a previous outside investigator hired “did not meet the standard of neutrality that the City and community seeks,” according to a copy of the resolution.

McClain was walking after buying iced tea at a corner store on Aug. 24, 2019, when he was stopped by police, McClain’s family attorney, Mari Newman, previously told ABC news.

Police received a call about him being “sketchy” because he was wearing a ski mask, though the caller noted that no weapons were involved and no one was in danger, according to a transcript of the call.

When police stopped McClain, a struggle ensued and officers placed him in a carotid control hold — which involves an officer placing his arm around a person’s neck, restricting the flow of blood to the brain from the carotid arteries.

Paramedics with the Aurora Fire Department also gave McClain ketamine, as per their department protocol used for “rapid tranquilization in order to minimize time struggling,” according to officials.

McClain, who had been throwing up, was put in an ambulance where he suffered cardiac arrest, according to police.

Though police said McClain regained consciousness and was being treated at a local hospital, he died several days later.

The resolution from Aurora City Council members called for a three-member team of people who have expertise in a multitude of areas, including law enforcement and police safety accountability, civil rights, EMT procedures and use of force.

The team should begin “its work immediately and shall complete its investigation as expeditiously as possible,” the resolution stated, though no timeline was given.

Kim Stuart, the communications director for the City of Aurora, told ABC News it would commence “relatively quickly.” Stuart also said the investigation would be “complimentary” of Attorney General Phil Weiser’s investigation, but will focus more on policies and procedures rather than criminality.

Stuart said it’s important “the investigation gives the city a clear path of actions we can take when it’s all done.”

The team will be led by Jonathan Smith of the Washington Lawyers Committee for Civil Rights and Urban Affairs, Washington D.C., a nonprofit law firm that addresses racial and economic justice in the criminal justice system, as well as other sectors.

Smith was not available to comment, however a spokesman with the law firm confirmed he was chosen by the city to be part of the investigation.

Smith, who has served as executive director for the law firm since July 2016, previously held positions as the executive director of the Legal Aid Society of the District of Columbia and as the chief of the special litigations section at the civil rights division of the U.S. Department of Justice.

The other members of the team have not yet been decided on, though Stuart said a handful are currently being vetted.

McClain’s death received renewed attention in June, as protests against police brutality erupted across the U.S. and world in the aftermath of the death of George Floyd, another unarmed Black man who was killed by Minneapolis police.

Back in June, Aurora city leaders said that a Connecticut attorney was leading a third-party investigation into McClain’s death, however, city council members noted that the attorney was a former police officer who worked closely with police departments, according to ABC Denver affiliate KMGH.

Colorado Gov. Jared Polis also announced back in June that he was appointing a special prosecutor to investigate the case and file charges if “the facts support prosecution,” saying “at a bare minimum [the family] deserve a thorough review of the case.” Phil Weiser, the state’s attorney general, will fill the role, the governor said.

New legislation would require women, like men, to sign up for potential draft
AnnaSophia Robb talks playing real-life prosecutor in Peacock’s true crime series, ‘Dr. Death’
‘Modern Family”s Ariel Winter hopes for “freedom” for Britney, “consequences” for people “who have kept her away”
Patina Miller and Omar Epps explain why ‘Power Book III: Kanan’ was the perfect series for them to join
Chrissy Teigen thanks fans for sending the “most amazing” condolences after loss of baby Jack
Pediatricians’ advice for parents confused about kids and face masks amid COVID-19 surge