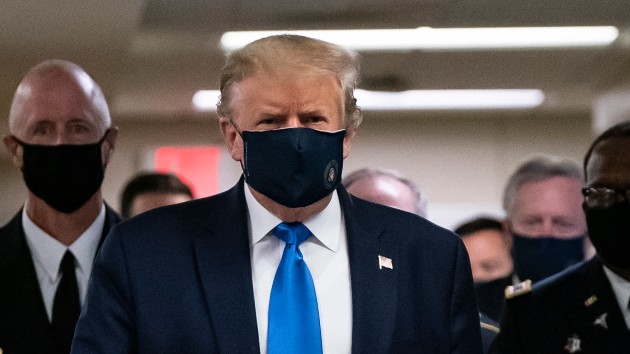 (WASHINGTON) — President Donald Trump on Monday tweeted a photo of himself wearing a mask, saying, “many people say that it is Patriotic to wear a face mask when you can’t socially distance” and “There is nobody more Patriotic than me, your favorite President.”

It wasn’t clear what message, if any, he might be sending his nearly 84 million Twitter followers and supporters, but it came just hours after he said he’d resume coronavirus task force briefings at the White House amid more bad poll numbers for his handling of the coronavirus crisis.

We are United in our effort to defeat the Invisible China Virus, and many people say that it is Patriotic to wear a face mask when you can’t socially distance. There is nobody more Patriotic than me, your favorite President! pic.twitter.com/iQOd1whktN

It also came after an interview in which he was in open conflict with his own health experts on the effectiveness of masks in controlling the outbreak of cases surging across the American South and West and as several states and retailers with stores nationwide implemented new mask mandates.

“No, I want people to have a certain freedom, and I don’t believe in that, no,” Trump told Fox News’ Chris Wallace when asked if he would consider a national mask mandate.

“I don’t agree with the statement that if everybody wear a mask everything disappears,” Trump said in the interview that aired Sunday, contradicting Dr. Robert Redfield, director of the Centers for Disease Control and Prevention, who said multiple times last week that if everyone wore a mask, the epidemic could be driven “to the ground” in a matter of weeks.

Drs. Anthony Fauci and Jerome Adams made those statements back in late February and early March when it wasn’t clear how the virus could spread. Since the science became better understood, months ago, they have strongly advocated for masks.

There appears to be no scientific basis for Trump’s claim that “masks cause problems, too.”

In the interview, Trump also repeated his false statement that more testing was the reason for the surge in new cases and minimized the significance.

As Trump continues to muddle the message around masks, several national chain stores, including Walmart and CVS, started mandating masks Monday, as did conservative states like Arkansas and counties across Mississippi.

Surgeon General Adams, on Fox and Friends Monday, pleaded with Americans, specifically those watching Fox — presumably many of them Trump supporters — to voluntarily wear face coverings.

“I’m pleading with your viewers, I’m begging you, please understand that we are not trying to take away your freedoms when we say wear a face covering,” he said. “We are saying if we do these things, we can actually open and stay open.”

Even as Trump downplayed the need for masks while claiming to be a “big believer” in them, Adams argued that the kind of anti-mask sentiment the president has encouraged has not gotten in the way of science.

“In many cases we are letting the politics and the policy get in the way of the actual practice. I want everyone to know that the science tells us right now that with the high degree of asymptomatic spread, up to 50% of people are spreading coronavirus without knowing that they have it. That’s what asymptomatic or pre-symptomatic means, that face coverings are a way that we can reopen and that we can stay hope,” he said.

While he tries to claim Adams and Fauci have opposed masks — while suggesting he has backed the idea — from the start of the pandemic, Trump said he didn’t see himself wearing a mask, sitting behind the Resolute Desk and meeting with world leaders. He has worn one in public only once, at what was largely a photo op at Walter Reed National Military Medical Center.

Trump said he leaves the decision “up to the governors.”

“Many of the governors are changing. They’re more mask into — they like the concept of masks, but some of them don’t agree,” Trump said.

More and more, Americans say they are donning face coverings.

And in a new ABC News/Washington Post poll, 79% say they wear a mask all or most of the time when they’re around other people outside their home.

Trust in Trump — and political views more broadly — corresponds with that.

Among people who generally trust what the president says on the issue, 41% say they always wear a mask around other people. That jumps to 66% among those who generally don’t trust him.

There appears to be a consensus that if Trump got on board with masks, more Americans would, too.

When asked during an interview on ABC’s This Week about whether Trump was sending out mixed messages on wearing masks, Arkansas Gov. Asa Hutchinson, a Republican, said “that example needs to be set by our national leadership.”

“I’m a Republican governor. Democrat governors have all — we’ve put in mask mandates based upon the circumstances of our state,” Hutchinson said. “It’s not popular. It’s not something we want to do. It’s not the first lever we pull. But it is one that, when the data says it’s necessary, we do it.”

The data, though limited, predicts masks would significantly slow the spread. For example, the IHME University of Washington model, often cited by the White House, now predicts more than 40,000 lives could be spared if Americans universally wore masks.