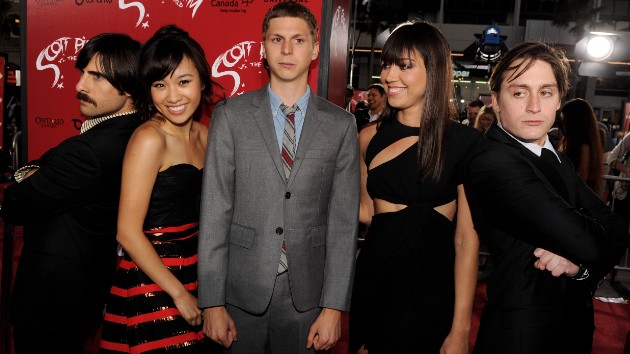 (LOS ANGELES) — It’s officially been ten years since the cult smash movie Scott Pilgrim vs. The World debuted in theaters and, to celebrate, the all-star cast is reuniting for a charity special.

10 years later, the cast of the action comedy is coming together again to not only celebrate the film’s aluminum anniversary, but to raise money for a worthy cause.

Plaza — who played the snarky Julie Powers — confirmed on Friday that the old gang was teaming up for a one time only table read to benefit Water for People on Monday.

“Monday July 20 at 1pm EST, join me & these freaks for the @EW 10th anniversary virtual read of SCOTT PILGRIM VS THE WORLD in support of @waterforpeople,” Plaza wrote on Sunday and teased a screenshot of the old cast and crew gathered together in a Zoom call-like setting.

The 36-year-old also explained what the charity Water for People does, which is “bringing cleaner and safer water to areas in need worldwide.”

“Visit http://waterforpeople.org/pilgrim to donate and learn more,” the Parks and Recreation alum encouraged.

The live read will not only entertain fans while raising money for a great cause, it’ll also reward watchers with an exclusive one-of-a-kind drawing that Cera flashed during the movie.  Drawings from the creator of the Scott Pilgrim comic series, Bryan Lee O’Malley, will also be rewarded randomly to donors.

Washington state deputy shot and killed in the line of duty
What to know about antibody tests in a post-vaccine world
Key moments from the Olympic Games: Day 1
Lack of diversity in higher learning can be a problem for diverse student bodies
Chinese shooter Qian Yang wins 1st gold medal awarded at the Tokyo Olympics
New legislation would require women, like men, to sign up for potential draft