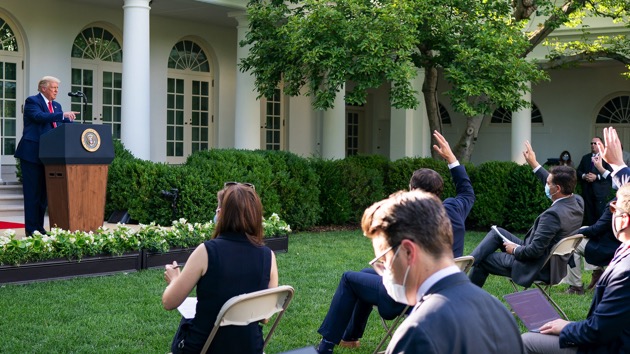 (WASHINGTON) — As coronavirus cases surge across the American South and West, President Donald Trump on Monday said he had decided to bring back the White House coronavirus briefings that he stopped amid widespread criticism, including leading them himself, likely starting Tuesday at 5pm ET.

“Well, we had very successful briefings,” Trump told reporters at an Oval Office photo op, when asked to clarify if the briefings were returning amid polls showing sinking approval ratings for how he’s handled the crisis.

“I was doing them and we had a lot of people watching, record numbers watching in the history of cable television — television, there’s never been anything like it. And we were doing very well, and I thought it would be sort of, automatic and a lot of positive things were happening and frankly, a lot of the country is doing well,” he said.

Notably, the president received criticism from members of his own party for holding the free-wheeling sessions, some close to two hours, during which he frequently touted misinformation and falsehoods.

Polls show a minority of Americans currently trust the president when it comes to COVID-19 compared to the nation’s health experts.

Trump said that while — in his view — “a lot of the country is doing well” — he acknowledged “this big flare-up in Florida, Texas, couple of other places.”

“So, I think what we’re going to do is I’ll get involved and we’ll start doing briefings,” he said. “Whether it’s this afternoon or tomorrow, probably tomorrow, and I will do briefings. And part of the briefing I think much more so than last time, because last time we were nowhere with vaccines or therapeutics and let’s say that ended six weeks ago. We’ll start them again and I think it’s a great way to get information out to the public as to where we are with the vaccines, with the therapeutics, and generally speaking, where we are.”

“I think we will start that probably starting tomorrow,” he added. “I’ll do it at five o’clock like we were doing.”