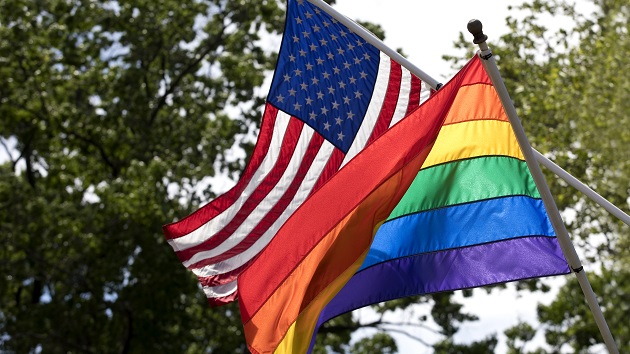 (NEW YORK) — Rosemary Ketchum discusses her breakthrough election to the Wheeling, West Virginia city council.
The growing political divide across the U.S. has inspired a record number of LGBTQ candidates to run for public office, according to a new report.

The report, released Thursday, found that the number of openly LGBTQ elected officials in the U.S. has more than doubled over the last four years, a number that could be boosted by the record number of LGBTQ candidates running for 2020 office, according to data compiled by the Victoria Institute.

According to the institute’s Out For America 2020 report, the number of openly LGBTQ elected officials in the U.S. rose 21% over the past year as the community continues to bask in the afterglow of key victories in the 2020 primaries, such as Ritchie Torres, the likely winner in the New York Democratic primary for the 15th Congressional District, and Gina Ortiz Jones, who could become the first LGBT member of the House of Representatives from Texas if she wins in November.

“Over the past year, LGBTQ elected officials have been on the frontlines — leading efforts to end racism, blocking bills targeting the trans community and passing legislation that moves equality forward for our community,” Ruben Gonzales, vice president of the LGBTQ Victory Institute, said in a statement Thursday. “Allies are important, but LGBTQ representation in the halls of power is critical to the success of our movement.”

Overall, the report found that there are currently 843 openly LGBTQ elected officials across all branches of government nationwide, a 102% increase from June 2016.

There are currently 850 LGBTQ candidates running for office this year, a record high, including several high-profile candidates with solid chances of being elected to Congress, the civil rights advocacy and research group found.

The number of openly LGBTQ elected officials increased “at a rapid pace” over the past year, despite fewer elections being held in the “off-election” year of 2019, the report showed.

Annise Parker, president and CEO of LGBTQ Victory Institute, said she was “pleased” with the results, but she noted there was a long battle ahead as the community remains “severely underrepresented” in U.S. government.

“While LGBTQ people are running for office in historic numbers, we remain severely underrepresented at every level of government — and that must change,” said Parker, who was elected as the first openly lesbian mayor of Huston in 2010. “We know that when LGBTQ people are in elected office and in the halls of power, they change the hearts and minds of their colleagues and it leads to more inclusive legislation.”

Parker, who severed as mayor of the country’s fourth-largest city until 2016, said the institute hopes to “build a pipeline of LGBTQ leaders who will change our nation for the better,” but the community is a long way from equal representation in government.

According to the report, at least 22,544 more LGBTQ candidates must be elected in order to reach equal representation as LGBTQ officials only account for about 0.17% of elected positions in the country.