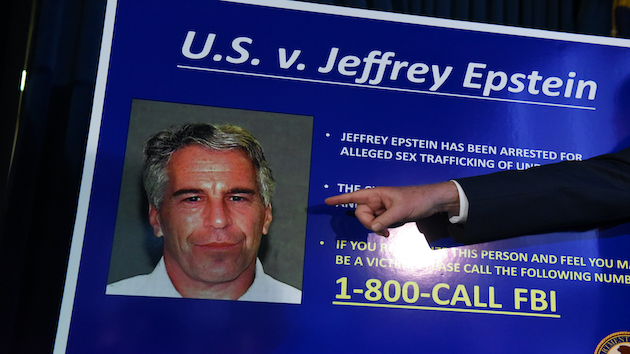 (NEW YORK) — An attorney for a woman who claims to be the first known child sex-abuse victim of Jeffrey Epstein and Ghislaine Maxwell is accusing the legal team representing Epstein’s estate of withholding evidence and attempting to prevent the testimony of a key witness, according to a letter sent to the judge overseeing her lawsuit on Wednesday.

“This behavior flies in the face of fairness, professionalism and much needed justice,” wrote Robert Glassman, the lawyer for the accuser, who filed the suit under the pseudonym Jane Doe.

According to the letter, attorneys for the estate have failed to turn over “a single page of evidence” in the three months since being served with pre-trial requests. The estate missed a previously agreed-upon deadline to begin producing documents in the possession of the estate that contained Doe’s name and information, Glassman wrote, and he claimed they abruptly called off a scheduled deposition of Darren Indyke, one of the estate’s co-executors and a long-time lawyer for Epstein and his affiliated companies.

The estate is “engaging in obstructionist litigation tactics intended to stonewall and deprive Jane Doe of plainly relevant discovery,” Glassman wrote, in asking for a conference with the court. “It is clear that absent court intervention, the Epstein Estate will not comply with its basic discovery obligations.”

Doe has already turned over more than 190 pages of documents to the estate earlier this month, according to the letter, but balked at the estate’s request for what Glassman called “largely irrelevant and, quite frankly, outrageous information” from Doe. Glassman claimed that among the requests were documents referencing “any and all medical procedures and consultations she has ever had throughout her lifetime, including while she was a minor,” even if such medical care was unrelated to Jeffrey Epstein’s alleged abuse of her.

Bennet Moskowitz, a lawyer for Indyke and Richard Kahn, the estate’s co-executors, declined to comment on the allegations raised by Glassman’s when reached Wednesday by ABC News.

But in a response filed in court Thursday, an estate attorney called Glassman’s letter “very premature” and a misrepresentation of what had occurred.

The estate claims that Indyke’s deposition was taken off the calendar to allow time for Maxwell’s lawyer, who had just entered the case, to confer with all parties about setting new schedules, and contended that production of documents in their possession was being held up only because Doe’s lawyers had yet to agree to a confidentiality order “which must occur before we produce documents that refer to [Doe], who filed this case anonymously, by her real name.”

Glassman told ABC News Thursday that he hadn’t agreed to delaying Indyke’s deposition and that he sees no need to for a confidentiality agreement to protect the identity of his client because there is a prior court order which deals with that.

“We’re interested in taking this case to trial and getting the evidence that we need in order to prepare the case for that time,” Glassman said, “And it appears that they’re more interested in sitting in their offices writing letters and objecting to everything that we’re trying to do.”

Lawyers for the estate have previously asked the court to dismiss some of Doe’s claims as beyond the statute of limitations. The lawyers for the co-executors have also encouraged Doe to participate in an alternative resolution program established by the Epstein estate, which launched last month after protracted delays.

The details in Doe’s lawsuit, which was filed in January against the Epstein estate and Maxwell, are substantially similar to the allegations pertaining to one of the three minor victims included in the federal charges against Maxwell, who is accused in a six-count indictment of assisting, facilitating and contributing to Epstein’s alleged abuse of three minor girls between 1994 and 1997.

“Jane Doe was their first known victim and was subsequently abused by Epstein and Maxwell for years as a young girl, suffering unimaginable physical and psychological trauma and distress,” her complaint said.

Maxwell pleaded not guilty to the charges at a hearing earlier this week and was ordered held without bail pending trial in July 2021. A week after Maxwell’s July 2 arrest in New Hampshire, her attorney filed an answer to Doe’s lawsuit, denying the claims while also noting the overlap between the lawsuit and the criminal case against Maxwell in New York.

“Ms. Maxwell’s denials of factual allegations [in Doe’s lawsuit] shall be interpreted the same as pleading not guilty to the various counts in any criminal indictment,” wrote Laura Menninger, a lawyer who has represented Maxwell in civil litigation for five years.

According to Doe’s civil complaint, she first met Maxwell and Epstein in 1994 as a 13-year-old student at a music camp in Michigan. A months-long grooming process continued, she alleges, after she returned home to Florida, where Epstein had a seaside estate on Palm Beach Island.

Doe’s father had recently passed away, the complaint said, creating an opportunity for Epstein and Maxwell to fill the void.

“Epstein gave himself the name of Doe’s ‘godfather’ while Maxwell acted like an older sister to her,” her complaint said. “They took her to movies, went shopping with her and lounged around Epstein’s estate with her.”

Doe, now 39, alleges the abuse escalated over the next few years as Epstein and Maxwell asserted more and more control over her life and aspirations. Epstein paid for voice lessons, private high school tuition and even co-signed a lease on a New York City apartment for Doe and her mother, according to her complaint.

She claims the abuse occurred at Epstein’s homes in Florida, New York and his ranch in New Mexico, and that she would often travel to those locations with Epstein and Maxwell on one of Epstein’s private jets.

“Epstein’s system of abuse was facilitated in large part by his co-conspirator and accomplice, Maxwell, who helped supply him with a steady stream of young and vulnerable girls,” the complaint said, “many of whom were fatherless, like Jane Doe, and came from struggling families.”

Doe’s case is one of just a few civil actions against the Epstein estate that are being actively litigated. Most of the pending lawsuits have been put on hold by alleged victims while they submit their claims to the alternative resolution program.

Epstein’s estate is valued at more than $655 million, according to a May 5 filing in probate court in the U.S. Virgin Islands, where Epstein owned a private island compound that served as his primary residence since 2010.

The criminal indictment against Maxwell is likely to further complicate Doe’s efforts to obtain evidence and testimony necessary to pursue her civil claims. It is expected that Maxwell will eventually seek to pause the case, at least as it pertains to her, while the criminal case against her is pending.