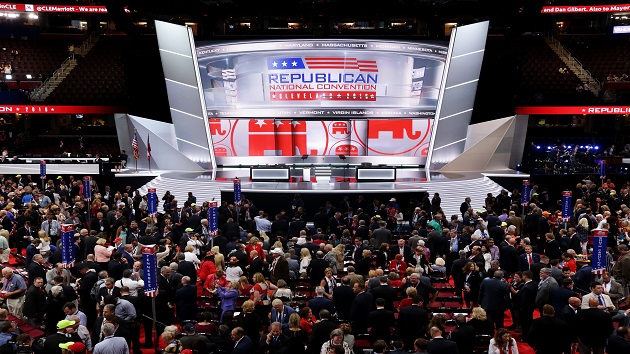 BY: TERRANCE SMITH AND WILL STEAKIN, ABC NEWS

(JACKSONVILLE, Fla.) — The Republican National Committee has scaled down plans for its convention next month in Jacksonville, Florida.

In a letter sent a letter to party members from Chairwoman Ronna McDaniel Thursday morning, now obtained by ABC News, McDaniel thanked members for their patience during these “unprecedented times” and that “adjustments must be made to comply with state and local health guidelines.”

The convention celebration will still be in Jacksonville from August 24th until August 27th when President Donald Trump will formally accept the nomination. During that time, the RNC plans for “each delegate, their guest, and alternate delegates will be permitted to attend,” McDaniel said in the letter.

McDaniel also said in the letter that North Carolina Governor Roy Cooper began to play politics with the convention therefore the decision was made the celebratory aspect of the event to Jacksonville, Fla., while keeping the business aspect of the convention in Charlotte.

The North Carolina Democratic party said in a statement Thursday morning that President Trump finally recognized that a full scale convention with no safety measure would be dangerous.

“With today’s news, the President has finally recognized what Governor Cooper had been saying for weeks — that a full-scale convention with no safety measures would be dangerous and deeply irresponsible. If it wasn’t already obvious that Donald Trump’s attacks against the Governor were purely political, it is now,” NCDP Communications Director Austin Cook said.

During a press call with reporters on Wednesday, Vice President Mike Pence said that the convention is a work in progress and that President Trump will be flexible.

“The President indicated that we’ll be flexible. We will continue to consult with Mayor Curry and other local health officials and Governor DeSantis as we move forward. But there’s consideration being given to having the convention in an outdoor setting, and also putting the kind of measures in place that put the health of all of those that are participating first.”

There will also be events in the daytime and evening throughout the convention in Florida and that health protocols will be implemented to ensure a safe event.

“We plan to implement a variety of health protocols in order to ensure a safe event. This plan includes but is not limited to on-site temperature checks, available PPE, aggressive sanitizing protocols, and available COVID-19 testing.”

However there are no specifics in the letter about how widespread and available the coronavirus testing will be to delegates, members of the media and Republican officials, amidst rising coronavirus cases in Florida.

Lucy Lawless reunites with ‘Xena’ co-star Renee O’Connor in season two of Acorn TV’s ‘My Life Is Murder’
Injured in a video game? Attorney Bryan Breynolds, no relation to ‘Free Guy’ star Ryan Reynolds, is here for you
Arizona mom urges masks in classrooms after her kindergartner contracts COVID-19
Watch trailer to Marlon Wayans’ ‘You Know What It Is’; Richard Roundtree & Terri Vaughn join ‘Cherish The Day’; and more
Blinken to meet ‘Havana syndrome’ victims amid ‘growing concerns’ about mysterious incidents
White House fires back at Florida’s GOP governor over handling COVID surge