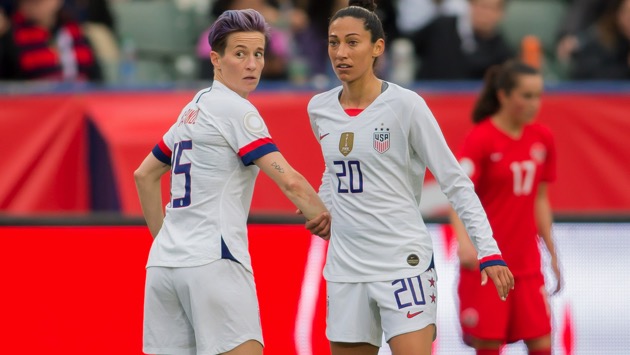 (NEW YORK) — The athletes on the U.S. women’s national soccer team have spent their whole careers disrupting the status quo and fighting for women. Now, some of the players are turning their efforts off the pitch to help mentor fellow female entrepreneurs as they navigate the unprecedented coronavirus-induced financial crisis.

“Being on the U.S. women’s national team, you kind of get passed this torch,” Christen Press, a forward on the squad, told ABC News. “And the fight for equity and challenging the norm of, you know, the expectation of what a women can and cannot do is just … part of the job you do on that team.”

Fresh off their World Cup win in 2019, the women returned to home to fight U.S. soccer’s governing body in court with a lawsuit alleging gender discrimination and unequal pay, sparking a national debate about how the nation values female athletes. The U.S. women’s national soccer team has won four World Cups — a global record. The U.S. men’s soccer team did not qualify for the most recent men’s World Cup in 2018.

In addition to their legal battle, Press and fellow forward Tobin Heath also co-founded the lifestyle company re-inc (stylized in lowercase and short for “reimagining incorporated”) with fellow teammate Megan Rapinoe and retired player Meghan Klingenberg as a way to own and capitalize on their success after the World Cup. The brand sells sustainable clothing and aims to create “customizable products, art, and experiences” over the next few years, according to its website.

“We started re-inc with a thought [that] we will always be fighting against infrastructures and powers of status quo,” Press said. “But with our own business re-inc, we’re like, ‘What can we fight for? How can we flip that on its head and both fight against what exists but also create and build new, you know, anti-racist, you know, gender-free structures, that support different groups of people?"”

Press and Heath said they have already encountered their fair share of obstacles operating a business, especially one that they are trying to hold to such high standards. Now, the two women are devoting their efforts to mentoring the 15 winners of the 2020 Stacy’s Rise Project, which spotlights female small business owners who are also trying to use their platforms to enact change in their communities.

“We want to make an impact that’s going to last and and this is a space that we really want to give into, which is female entrepreneurship, because we just believe that there’s so much abundance there,” Heath told ABC News.

“There is a real need for females to be represented in this space,” she added.

The Rise Project, sponsored by the snack maker Stacy’s, selected the 15 women entrepreneurs out of more than 1,600 applicants and will provide them with $10,000 grants, marketing assistance and executive mentorship. The women entrepreneurs range from running a Black-owned conscientious candle-making shop to creating eco-friendly feminine hygiene products.

Similar to many of the Stacy’s Rise Project winners, Heath said that with re-inc, their goal has always been “challenging that status quo” every step of the way — from how they do business and within their corporate leadership, to how they make products.

“When it comes to the challenges of being an entrepreneur and a female, specifically a female entrepreneur, it’s something that we really have been living for a long time in a different pool,” she added. “And we’re bringing those same kind of qualities into this — and the same kind of adventure and attitude and kind of ‘Never Say Die’ fight that we all have.”

Heath also noted that “there are just so many parallels between sport and business.”

In her soccer career, Heath said she relied on veteran players to teach her the ropes of how to be a professional athlete, adding, “I’ve learned in business that this is essential as well, through mentors and mentorship.”

“I spent my whole life as a soccer player and I’ve honed every skill, I continue to hone them, you can never be good enough,” Heath said. “And in business, there are a lot of things that that I’m learning, and I think it’s interesting because … this idea of ‘team,’ is so much more powerful.”

“We were kind of built for her challenges, and they certainly exist in the business world,” Heath said. “And for female entrepreneurs, there’s a lot.”

Press added that when they started re-inc, “we had this idea, like, more diversity in leadership positions creates a better world, you know, so it’s like, simple, we’ll go and we’ll do better.”

Still, Press said the advice she would give to young female entrepreneurs is the same advice that her teammate and now business partner, Heath, gave her.

“When things are getting harder, you know you’re going in the right direction,” Press said. “The air’s thinnest at the top of the mountain, so like when you’re hitting those challenges, that’s when you know you’re doing the right thing.”

When challenges mount, Press said her advice is to “embrace the thin air” and know “you’re going in the right direction and you’ll hit the peak.”

The attitude of perseverance is something the women have proven through their victories on the pitch but continues to be tested as their legal battle wages on. In May, a judge dismissed the gender discrimination lawsuit, though the women have vowed to appeal.

“As long as I’ve been on this team, we’ve been a part of a fight for gender equity and fair treatment, and I think it will be a fight that we’re in for a very long time,” Press said of the lawsuit.

“It was never going to be easy,” she said. “If it was easy, then we wouldn’t have to fight it.”

Press noted that times are changing, citing the increased support in recent months for the Black Lives Matter protests and in recent years for her team’s fight for gender equity in sports.

“It’s really a time for everyone to reset social norms and start to build a better world, and I feel like these unusual circumstances that we’re in have really given people the space to think about what is right and what needs to happen and what kind of world we want to live in,” Press said.