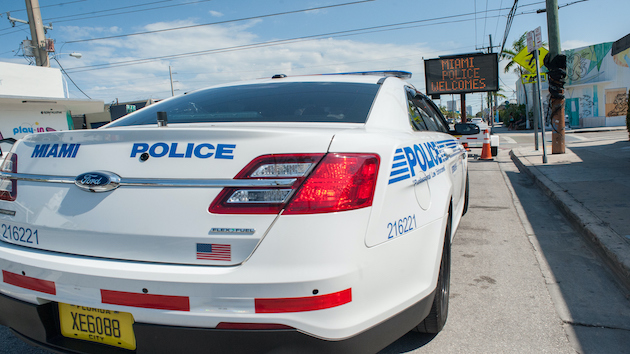 (MIAMI) — As Miami quickly takes its place as the epicenter of the nation’s ongoing COVID-19 surge, the city announced 155 officers had been placed under quarantine with nearly half of them testing positive as of Thursday.

Miami Police Chief Jorge Colina, who contracted the virus back in April, said 155 officers were under home quarantine and 79 had tested positive, along with about a dozen of the department’s civilian employees.

In response to the alarming figures, the department has implemented a self-isolation plan as a precaution and is encouraging officers to work with contact tracers.

Miami-Dade County, which includes Miami and Fort Lauderdale, has been among the country’s hardest areas. The state reported 13,965 additional COVID-19 cases on Thursday, bringing the total to 315,775 and marking the state’s second-highest single-day case count.

Florida had reported 100,000 cases of coronavirus during the few months following initial outbreak, but the state saw a surge of 100,000 more cases in the two-week period ending July 5 amid controversy over likely reopening too quickly.

In addition, Colina said police departments also are suffering due to issues stemming from the Sunshine State’s testing lab capacity, creating a lag in reported results, he said.

“Sometimes we are able to get an officer tested pretty quickly, but there will be a delay when we get those results back. Obviously, throughout that whole time, we have to keep them isolated at home,” he told WPLG.

He said the city had managed to keep the department’s response times to emergency calls at normal rates, but he’s anxious to get the first responders back into good shape.

“We are getting hit pretty hard, just like everyone,” Colina said. “Now the second we are able to test them and clear them, we bring them back, but it has been a challenge for us no doubt.”

Nathan Fillion gives new meaning to “arms control” as TDK in new clip from ‘The Suicide Squad’
’13 Reasons Why’ star Tommy Dorfman owns her truth: “I have been privately identifying and living as a woman”
Pelicans hire Suns assistant Willie Green as head coach
Pelosi considering adding former GOP congressman as adviser to January 6 committee
Disability advocates calling for reform as US Paralympian Becca Meyers drops out of Games citing lack of support
Frontline workers in Nevada say they are ‘reliving 2020’ as new infections surge to highest point in five months