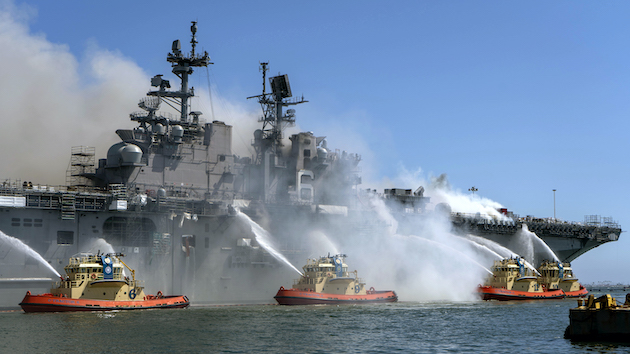 (SAN DIEGO) — The Navy says that all known fires aboard the USS Bonhomme Richard have been extinguished, four days after the start of a raging blaze that has left in doubt whether the amphibious assault ship can remain in service.

“After four days of firefighting, all known fires have been extinguished aboard USS Bonhomme Richard (LHD 6),” Rear Adm. Philip Sobeck, the commander of Expeditionary Strike Group 3, said in a statement.

“Our fire teams are investigating every space to verify the absence of fire,” said Sobeck. “Until every space is checked and there are no active fires we will not be able to commence any official investigations.”

The admiral said that the origin of the fire remains unknown as is the extent of the damage inside the ship.

“We do not know the extent of the damage. It is too early to make any predictions or promises of what the future of the ship will be,” said Sobeck. “We cannot make any conclusions, until the investigation is complete.”

Overnight, hundreds of Navy and federal fighters were temporarily evacuated from the ship after it was determined that the ship was listing too much. The addition of water to put out the fires on the inside of the ship have created extra weight that made the ship list by 5 degrees.

With the fires now out, the Navy plans to pump out the remaining water in the ship, said Navy officials.

Earlier in the week the fire that had raged atop the flight deck brought down one of the ship’s two masts that hold its radar and communications equipment.

Photos that have emerged on social media show the ship’s massive hangar bay has been gutted and burnt as a fire that at times reached 1,200 degrees raged throughout the ship’s interior.

While there has been damage throughout most of the ship, the main engineering areas remained untouched, a factor that could impact decisions about the ship’s viability.

Navy helicopters carried out more than 1,500 water bucket drops and tug boats sprayed water on the ship’s side to cool down its hull as fires raged below deck.

Sixty-three personnel, including 40 sailors and 23 civilians, were treated for minor injuries such as heat exhaustion and smoke inhalation. None of them remain hospitalized.