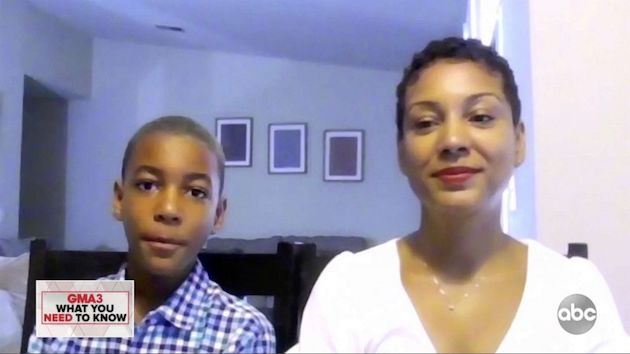 (NEW YORK) — A young Black boy from Maryland went viral for his powerful, poetic prose, which captured the heavy atmosphere of racial injustice in the United States.

Like so many Americans, Josiah Wheeler — an 11-year-old musician and artist — was saddened and frustrated by the death of George Floyd. So, he decided to channel his emotions into a poem, titled “My Skin’s Not a Weapon.”

Josiah and his mother, Tameka Lloyd, spoke to ABC News about the meaning behind his words and the impact they hope it has on others.

“It’s unfortunate that all of the hatred in this world and police brutality is really what inspired me to share my poem. I just felt I had to share my voice,” he told ABC News. “The change I want to see happen is so everyone understands everyone else’s pain. Just because some others might not experience police brutality, doesn’t mean it’s not a real thing. Because it’s very real, but not everyone experiences it.”

He added that his hope is “for everyone to kind of work this out, because it’s not going to change unless we all work together.”

As a mother, Lloyd said she was “extremely touched by his poem.”

“I had no idea that he had written a poem until he showed me the finished version. I was just impressed by how well he was able to articulate himself and express himself creatively,” she said.

Lloyd explained that as an Air Force family that has traveled, “my children don’t have the privelege of living in a bubble where we pretend that racism doesn’t exist.”

“We talk about it and I encourage them to be the best versions of themselves,” she said. “I’m just proud of Josiah that he’s taking things to heart and expressing himself in such a postitive way.”

Read Josiah’s full poem, “My Skin’s Not a Weapon,” below.

It’s hard being on that black list.
I know, struggling with the racist,
Protest it’s gonna get violent.
I know we’re all struggling.
Look to me color’s all you see,
George Floyd his neck under your knee,
Bettie Jones killed on Christmas Eve,
By the cops we all loved.
Protest our rights are what we need.
Tear gas in my eye help me please.
How’d this all lead in history?
My skin’s not a weapon.
Having to tell your child,
The person you want to have everything,
That because of their skin tone
They might not be liked,
Or get special opportunities.
Or to have to teach them to not let police think you’re a threat.
Because God forbid that.
Some of us live that.