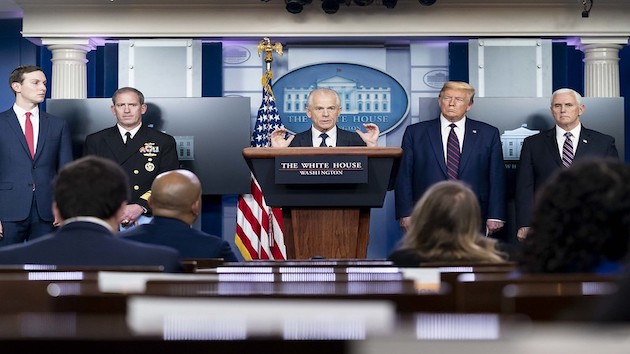 (WASHINGTON) — The White House on Wednesday distanced itself — but did not disavow — claims made in an op-ed by the president’s top trade adviser, Peter Navarro, trashing the nation’s foremost infectious disease expert, Dr. Anthony Fauci.

In a remarkable broadside against Fauci, who polls show the American public broadly trusts for information on the novel coronavirus, Navarro wrote in the op-ed for USA TODAY Tuesday that “Fauci has a good bedside manner with the public, but he has been wrong about everything I have interacted with him on.”

Navarro, who has no known medical expertise, went on to contrast his own response to the coronavirus pandemic with misleading characterizations of Fauci’s own comments on the virus. A portion of what he wrote was also included as a statement from him in a Washington Post article published Saturday.

“So when you ask me whether I listen to Dr. Fauci’s advice, my answer is: only with skepticism and caution,” Navarro wrote.

Asked on Wednesday if he was OK with Navarro’s op-ed, Trump did not take issue with its content.

“Well, that’s Peter Navarro, but I have a very good relationship with Dr. Fauci,” Trump told reporters in the Oval Office.

Among Navarro’s qualms with Fauci, the longtime director of the National Institute of Allergy and Infectious Diseases, is over the efficacy of the antimalarial medication hydroxychloroquine. Long touted by President Donald Trump and Navarro as a promising treatment for COVID-19, Fauci for months disagreed, and the U.S. Food and Drug Administration determined it was “unlikely to be effective in treating COVID-19.”

While she added that the president “values the expertise of the medical professionals advising his Administration,” she did not disavow anything Navarro wrote.

Navarro did not respond to a request for comment on whether he got approval from the president or any other White House official before publishing the op-ed.

The criticism fit a pattern of the Trump administration minimizing public health experts and prioritizing an economic recovery, which the president sees as key to his reelection chances.

The White House declined to comment on whether Navarro would be punished for writing the op-ed, and it did not respond to a question of whether he got permission from any White House official outside the communications office to write the piece.

Navarro’s attack came as the White House sought to discredit Fauci, who has provided a more blunt and sobering assessment of the state of the epidemic than the president and his top aides have sought to project — one they see as politically inconvenient as Trump campaigns for re-election.

Over the weekend, the White House provided several media outlets with a misleading list of comments made by Fauci, in an effort to undercut him.

The White House on Monday then tried to deny there was a behind behind-the-scenes campaign to discredit the nation’s leading infectious disease expert.

“There is no opposition research being dumped to reporters. We were asked a very specific question by The Washington Post, and that question was President Trump noted that Dr. Fauci had made some mistakes, and we provided a direct answer to what was a direct question,” McEnany said.

But despite the denial of a privately waged smear campaign, one of the president’s top aides made no effort to hide his disdain, airing criticism of Fauci in plain view on social media.

The White House’s deputy chief of staff for communications, Dan Scavino, who has been by the president’s side since the 2016 campaign, on Sunday posted a cartoon on Facebook depicting Fauci as a running faucet washing the U.S. economy down the drain.

“Sorry, Dr. Faucet! At least you know if I’m going to disagree with a colleague, such as yourself, it’s done publicly — and not cowardly, behind journalists with leaks. See you tomorrow!” Scavino wrote in a caption accompanying the cartoon.

On Monday, Trump himself shared a tweet disparaging Fauci — misconstruing a months-old comment Fauci had made — before telling reporters later in the day that he liked Fauci “personally,” had “a very good relationship” with him, and considered him “a very nice person.”

But, he added, “I don’t always agree with him.”

While the president and White House have sought to downplay the appearance of conflict that they have directly stoked, Fauci has been increasingly sidelined within the White House’s coronavirus task force.

He is no longer a regular presence at task force briefings with the media led by the vice president, he was not a participant on the vice president’s weekly call with governors on Monday, and it’s been two months since Fauci says he has personally briefed the president.

Trump, facing re-election this year, is facing broad disapproval for his management of the pandemic. In an ABC News/Ipsos poll released Friday, 67% of Americans said they disapproved of his oversight of the crisis, a new low since ABC News/Ipsos began surveying on the coronavirus in March.

Fauci has had a higher approval rating than the president in national polls related to the coronavirus response.

Lucy Lawless reunites with ‘Xena’ co-star Renee O’Connor in season two of Acorn TV’s ‘My Life Is Murder’
Injured in a video game? Attorney Bryan Breynolds, no relation to ‘Free Guy’ star Ryan Reynolds, is here for you
Arizona mom urges masks in classrooms after her kindergartner contracts COVID-19
White House fires back at Florida’s GOP governor over handling COVID surge
“The soul of The Valley is on the line”: With teaser, Netflix announces ‘Cobra Kai’ Season 4 to debut in December
Is delta more dangerous for children? Pediatrician answers top back-to-school questions