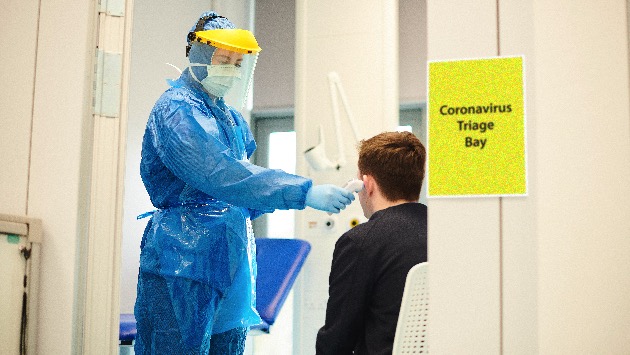 (NEW YORK) — As data shows more and more younger people are getting infected by the novel coronavirus, health experts are trying to bust a myth that they say has stifled the global health crisis response: that young people can’t get seriously ill from the virus that has killed more than 574,000 people around the world.

While the majority of hospitalized patients remain older Americans, and nationally the death rate in the younger age group remains extremely low, several state and hospital officials across the nation are increasingly reporting that young people are not just contracting the virus — it’s making more and more of them ill enough to be admitted to hospitals.

“Everyone who is young in that age group has the same idea of ‘I’m young, I’m not gonna get it, [and] if I do get it, it’s not gonna be that bad,’” said Dr. Michael Seemuller, a doctor at AnMed Health in South Carolina and the chair of Quality and Safety for its physician network. “And then they get it and they end up in the hospital.”

Officials and doctors in some states like California and Colorado told ABC News they haven’t seen a marked increase in admissions for young patients lately. But government or hospital officials at least a half dozen states — out of 18 that provided hospitalization data, some broken down by age, to ABC News — said they see more and more youths come through their doors, including hard-hit states like South Carolina, Texas and Louisiana.

Seemuller said that younger people’s potential susceptibility to severe complications from the virus was there from the start, even if many didn’t realize it.

“People have always been admitted to the hospital in that age group, and no one wanted to listen to that,” Seemuller said. “The early message was that young people will be fine but that’s just not true.”

Beyond being potential carriers of the disease that could endanger older Americans, the experts said the younger population itself is still susceptible to long-term effects from COVID-19, such as damaged lungs as well as blood clots that can lead to big and small heart attacks or strokes.

“I think the message we’ve been really trying to get to that age group, is that there are lots of things we don’t know about the virus, that it’s not safe,” Louisiana Assistant Health Secretary Dr. Alex Billioux told ABC News. “As we learn more and more, actually, we learn about potential long term impacts from COVID. That, I would think, would personally be very scary for any age group.”

In one of the worst coronavirus hot spots right now, Dr. Matthew Heinz in Tucson, Ariz., said he admitted six COVID-19 patients in their 20s just this past Sunday, the highest number he’s seen in one shift.

“It was just striking because I usually get one or two younger patients every time there’s a cluster of COVID patients but in this case, it was basically all of the COVID patients I had just happened to be 25, 28-year olds,” Heinz told ABC News.

“One of the 25-year-olds I admitted during my shift looked terrible,” said Heinz. “He looked like he had a horrible, nasty, nasty flu and was requiring four or five liters of oxygen. And this is a young, healthy guy.”

Heinz said he too believes younger people who gather in large crowds and attend social parties, think they are immune and are contributing to the increase in hospitalizations since Arizona reopened in May.

“So it’s about 21 days from the time of the party, the initial offense when hospitals will see the effects,” said Heinz, describing a hypothetical example. “That means people will go out once, think that they are fine because they don’t feel sick immediately and keep going out and congregating in large numbers. Since my state has reopened, those infections keep coming in the door and they’ve never stopped.”

Across the state in Arizona, people over the age of 65 still make up the largest chunk of hospitalized COVID patients — more than 40% — but those between 20 and 44 years old also make up 20% of COVID patients currently hospitalized, state-released data shows.

In Texas, which has also been hit hard this summer, Dr. Faisal Masud, the head of the Center for Critical Care at Houston Methodist Hospital, said back in March and April, 60 to 70% of the patients around the greater Houston metropolitan area were people over the age of 55, and just around 20% were less than 50. In June and July, the percentage of those under 50 is hovering around 40%.

“That’s a pretty remarkable shift,” Masud said. “It’s a significant amount of admissions to the hospital of people who should not be in the hospital.”

Masud said a key factor in the rising hospitalization among the younger population is that there’s a large number of young people who are obese and have a significant history of smoking or vaping, as well as asthma or kidney conditions, which could contribute to raising the chance of developing a severe illness from the coronavirus.

“What I tell people is that COVID-19 is an equal opportunity killer,” Masud said. “The myths of security of age are gone. The myth that summer will come and the virus will die out, that is defeated. The myth that even if I get it I will not get sick, that’s been defeated.”

“It’s very rare for that age group [between 18 – 29] to have severe complications but when we start to see such large numbers of individuals with COVID, it means that you’re going to see more individuals in that age group with complications, just statistically,” Billioux said. “Even if it’s a rare event, if you increase a number of events, you’re going to see more of it.”

As of July 13, patients under the age of 30 made up nearly 30% of all cases in Louisiana, with the age group between 18 and 29 being the largest chunk among different age groups, state-released data shows.

Similarly in Minnesota, where cases among younger people exploded in the past month, the median age of hospitalization decreased from 63 in the first week of April to 54 in the last week of June, the state health department’s spokesperson Julie Bartkey told ABC News. In comparison, the median age of deaths has remained in the low 80s over the months.

In New Jersey, where nursing homes had been struck hard earlier in the pandemic but have since been recovering under lockdown and extra safety measures, the average age of hospitalized COVID patients decreased from 66.5 in April to 55 in June, while the average age of deaths dropped at a slower rate, from 78 in April to 74 in June, the state’s health department spokesperson Nancy Kearney told ABC News.

But hospitalization and deaths among younger patients in New Jersey still only make up a very small percentage of the total — only around 4% of those hospitalized from COVID are under the age of 30, Kearney added.

Meanwhile, in other states where cases and deaths have been raging this summer, officials report that they have not seen a huge shift in hospitalization toward the younger population. Some states that haven’t seen as much, like Colorado and Idaho, also say their age distribution has remained mostly flat.

In California, the average age of hospitalized COVID patients has slightly decreased from 64 at the beginning of the pandemic, to 57 in early July, but mostly remained steady over the months, according to the state’s Public Health Department.

Dr. Brad Spellberg, chief medical officer at Los Angeles County and USC Medical Center, said his hospital has not seen much of a shift to younger patients, but partly because it has had a higher number of younger patients to begin with.

“This may be, in part, because as a public hospital, we generally tend to have younger patients at baseline,” Spellberg said. “Since the beginning of the pandemic we’ve seen teenagers, people in their 20 to 30s, and all the way up to their 80s. And we’re still seeing that same mix.”

In Florida, while the percentage of hospitalized COVID patients under the age of 44 has not changed drastically. At the beginning of April, they made up about 15% of total hospitalized, and as of July 13, the number has gone up to 18%, according to state-released data.

But hospitals like the Tampa General Hospital have seen high numbers of younger patients come in since Memorial Day.

“We are seeing younger patients that are getting sick,” Dr. Myers, director of inpatient COVID care at Tampa General Hospital, told ABC News. “We’ve had people in their 20s that are intubated and then people in their 90s that go home okay.”

But as officials and experts from different states see a varying degree of younger population getting hospitalized from COVID, one point that has been observed across the board is that more and more younger people are testing positive and carrying the virus through their communities. And health experts stress the importance of a consistent public messaging critical in addressing this problem.

“What I’ve come to understand is people listen to what they want to listen to, and that is a challenge,” Masud said. “And with mixed messaging all up and down everywhere, I can totally understand that they choose to agree to certain messages and do not agree to other messages.”

“It is very important for people to understand that our communities have the power to change that trajectory,” Masud said. “We all love freedom, but freedom can’t go before responsibility.”