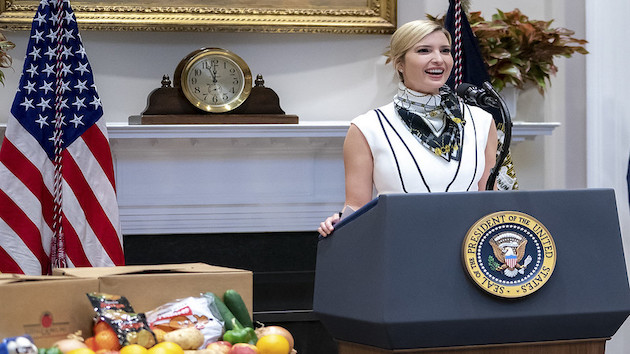 (WASHINGTON) — The president’s daughter and senior adviser, Ivanka Trump, faced backlash Wednesday after posting a photograph of herself posing with a can of Goya beans — something experts said was a clear violation of federal ethics rules.

Trump posted the picture Tuesday night — showing her smiling while holding a can of Goya’s black beans — on Twitter and Facebook alongside the company’s slogan, “If it’s Goya, it has to be good,” in English and Spanish.

U.S. regulations prohibit federal employees from using their public office “for the endorsement of any product, service or enterprise.”

Trump shared the image amid calls to boycott the New Jersey-based food company Goya, known for its foods particularly popular in Latino households, after its chief executive visited the White House last week.

“We are so blessed to have you as our leader,” the CEO, Robert Unanue, told President Donald Trump on Thursday at the announcement of a White House measure dubbed the “White House Hispanic Prosperity Initiative,” part of the president’s effort to court Latino supporters.

President Trump on Wednesday morning tweeted implicit backing of his daughter’s posts, writing that Goya was “doing GREAT and that “the Radical Left smear machine backfired, people are buying like crazy!”

Ethics experts said that Ivanka Trump’s promotion of a Goya product on her personal social media accounts, on which she identifies herself as an adviser to the president and which she regularly uses to promote the administration, clearly broke the rules, specifically Title 5, Section 2635.702, of the U.S. Code of Federal Regulations.

Walter Shaub, who directed the U.S. Office of Government Ethics from 2013 to 2017 until he resigned after clashing with the President Donald Trump over alleged conflicts of interest involving his business entanglements, wrote on Twitter that Ivanka Trump’s tweet was “clearly a violation of the government’s misuse of position regulation.”

“There’s a particularly unseemly aspect to this violation: it creates the appearance that the government’s endorsement is for sale,” Shaub said. “Endorse the president and the administration will endorse your product.”

A spokeswoman for the White House said in a statement that Trump had been expressing her “personal support” for Goya.

“Only the media and the cancel culture movement” — a reference to online calls online to boycott certain figures — “would criticize Ivanka for showing her personal support for a company that has been unfairly mocked, boycotted and ridiculed for supporting this administration — one that has consistently fought for and delivered for the Hispanic community,” the spokeswoman, Carolina Hurley, said. “Ivanka is proud of this strong, Hispanic-owned business with deep roots in the U.S. and has every right to express her personal support.”

Norm Eisen, who from 2009 to 2011 served under President Barack Obama as a White House special counsel and a special assistant for ethics and government reform, noted that even though Trump posted on her personal social media accounts, those accounts still listed her as an “”Advisor to POTUS” and the posts would still qualify as “a serious ethics violation.”

Eisen, who more recently served as a special counsel to the House Judiciary Committee during President Trump’s impeachment and Senate trial, told ABC News “this would’ve been treated as a serious matter in any other administration.”

“In the Trump administration, she will probably be rewarded,” Eisen said. “That bespeaks an ethical degradation for which the voters are about to punish the president severely.”

Alyssa Milano says she and Shannen Doherty “are cordial” now, opens up about their feud
Manchin raises concerns over billionaires’ tax as Democrats scramble to close social spending deal
What to know about Jessica Rosenworcel, who was nominated to become first woman to lead FCC
Manchin speaks out about his tough bargaining with Biden, fellow Democrats
Hilaria Baldwin posts about “tragic incident” that left cinematographer dead on husband Alec Baldwin’s film
Facebook whistleblower documents offer new revelations about Jan. 6 response