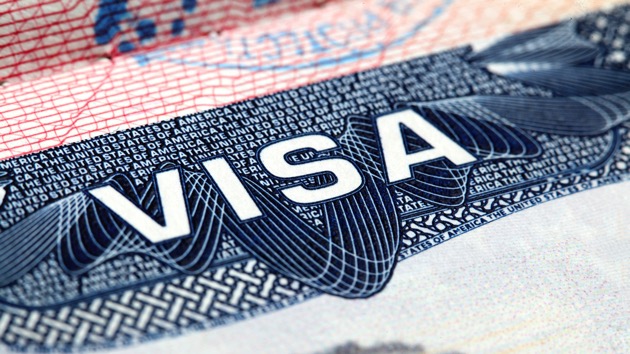 (WASHINGTON) — U.S. embassies and consulates around the world will soon resume visa services, the State Department said Monday, although it is not providing details on where or when.

The worldwide suspension of U.S. visas, except for emergency cases, has been one of several ways the Trump administration has severely restricted immigration and travel to the U.S. amid the coronavirus pandemic.

The latest move in that campaign has been the most controversial — barring international students from taking classes fully online this fall semester, even as several U.S. universities move to online-only coursework because of the uncontrolled outbreak in several states. That decision has been challenged in court by more than a dozen states and over 200 universities.

“The resumption of routine visa services will occur on a post-by-post basis, in coordination with the Department’s ‘Diplomacy Strong’ framework for safely returning our workforce to Department facilities,” a State Department spokesperson told ABC News on Monday.

But they are “unable to provide a specific date for when each mission will resume specific visa services,” the spokesperson added, referring questions to each individual embassy or consulate’s website for more details.

So far, no embassy or consulate has announced plans to resume visa services.

After Secretary of State Mike Pompeo issued an unprecedented authorized departure in March for all U.S. missions, allowing diplomats and their families to return to the U.S., many posts are still facing staffing shortages and figuring out how to restart services with social distancing practices in often crowded waiting rooms.

Since March 20, routine visa services have been suspended at all U.S. missions, allowing only for life-and-death emergency appointments.

President Donald Trump has also limited who can receive a visa through a series of executive orders, suspending H-1B visas, H-2B visas, L visas, and certain J visas through Dec. 31. H-1B visas are for highly skilled employees in fields like engineering or information technology, while H-2B visas are for seasonal workers like manufacturing or food processing. The J visa ban affects au pairs, camp counselors and teachers, and L visas are those transferred by their company to the U.S.

Even when visa services resume, travel from over two dozen countries to the U.S. is still barred under Trump’s presidential proclamations — for any foreigner who has traveled in the prior two weeks through China, Iran, the United Kingdom, Ireland, Brazil and Europe’s Schengen Area, a 26-country bloc that includes France, Germany, Italy and Spain.

While the State Department says it is resuming services, one U.S. consulate is actually moving to close its doors temporarily. The U.S. consulate in Cusco, Peru, where there are still American citizens being evacuated four months after the government suddenly shut its borders and left thousands stranded, is closing next Monday until at least mid-November. The consulate said Monday that U.S. citizens in the area should seek assistance at the U.S. embassy in Lima, which is 356 miles away — an 1.5-hour flight or 18.5-hour drive.

These visa restrictions have real consequences for families torn apart by border closures, such as American Arnie Fagan whose partner Vilayvanh Soulinthong and daughter Jasmine were stuck in Thailand and he was unable to travel back to their home there. The family was eventually reunited after Soulinthong was able to get an emergency visa appointment and travel to Missouri, according to the Columbia Daily Tribune.

At least 6 Republican operatives, some tied to Trump camp, working to get Kanye West on the 2020 ballot
Denying federal aid to state, local governments could put neediest residents at risk
Coronavirus updates: State Department issues new travel rules
History made as first African American general leads one of the military services
Doctors warn cancers are going undiagnosed amid COVID-19 pandemic. Here’s what you can do to decrease the risk.
School buses adapt to keep kids safe during COVID-19 crisis