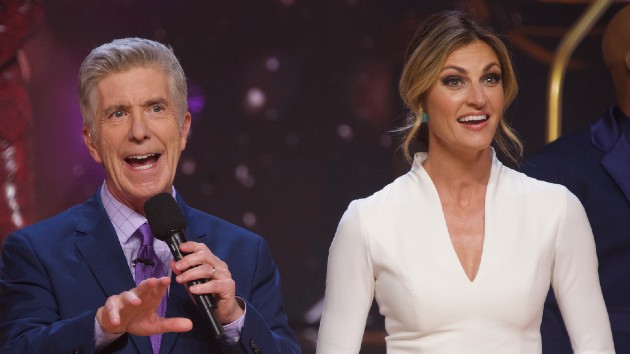 (LOS ANGELES) — A major shakeup has come to Dancing with the Stars, as series original host Tom Bergeron announced he’s exiting the show after a 15-year run that spanned an impressive 28 seasons.

What’s more, his co-host Erin Andrews will not be returning to the long-running series, either, ABC announced.

Bergeron, who’s been a stalwart of the show since 2005, made the shocking announcement Monday in a tweet.

“Just informed @DancingABC will be continuing without me. It’s been an incredible 15 year run and the most unexpected gift of my career,” The 65-year-old revealed on Twitter.  “I’m grateful for that and for the lifelong friendships made.”

Bergeron remained in good spirits about stepping down, offering a small joke regarding all the outfits he donned during his expansive hosting career. “That said, now what am I supposed to do with all of these glitter masks?,” he concluded.

During his time serving as host, Bergeron was nominated for 11 Emmy Awards, winning one in 2012 for Outstanding Host for a Reality or Reality-Competition Program.

Shortly after Bergeron’s announcement, ABC and BBC Studios confirmed his departure, offering a joint statement that read, “Tom Bergeron will forever be part of the Dancing with the Stars family. As we embark on a new creative direction, he departs the show with our sincerest thanks and gratitude for his trademark wit and charm that helped make this show a success.”

The statement also revealed that Andrews, who co-hosted the show for nearly a decade, will not be be back for the show’s 29th season.

“Erin will also not be returning, and we appreciate all that she brought to the ballroom,” The statement furthered. “Fans have been rooting for her since she originally competed as a contestant back in 2010, and her signature sense of humor has become a hallmark of the show.”

At least 6 Republican operatives, some tied to Trump camp, working to get Kanye West on the 2020 ballot
History made as first African American general leads one of the military services
Doctors warn cancers are going undiagnosed amid COVID-19 pandemic. Here’s what you can do to decrease the risk.
Doctor delivers baby 25 years after delivering his mom
The ‘Edward Scissorhands’ house is up for sale and could be yours for $224,000
2020 may be ‘one of the busiest’ hurricane seasons on record: NOAA